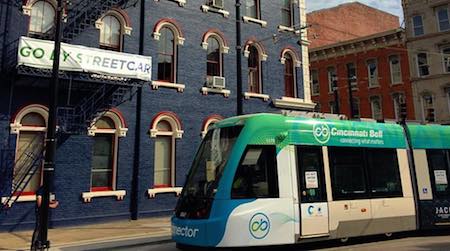 Following the ceremony, dignitaries took an inaugural first ride on the 3.6-mile loop, which includes 18 stops in Cincinnati's downtown area.

"We are proud to partner with Cincinnati on its streetcar and usher in a new era for getting around in this vibrant city," said Flowers in a press release. "The streetcar will expand transportation options for residents and visitors, spur economic development and connect workers to jobs, helping to build ladders of opportunity throughout the city."

The streetcar has already spurred "millions of dollars in redevelopment" in the city, with new retail and housing springing up along the line, according to the FTA.

Local telephone and internet provider Cincinnati Bell bought naming rights for the line under a $3.4 million, 10-year agreement. The system is owned and funded by the city, managed by SORTA and operated by Transdev.

The line was funded in part through a $16 million Transportation Investment Generating Economic Recovery (TIGER) grant. The cost to build the entire route was $148 million, according to the project's website.