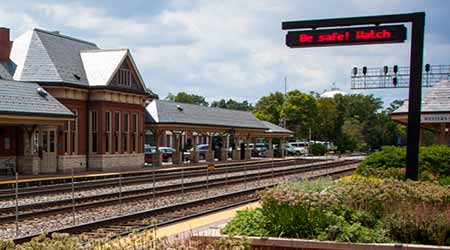 The Regional Transportation Authority (RTA) is seeking public feedback on nine Chicago-area projects proposed as part of its 2019 community planning program. Public comments will be accepted until March 8.

The program offers technical assistance to local governments and intergovernmental organizations to address local planning needs that involve public transportation and land use.

"Through this assistance, [we] encourage municipalities in the region to develop walkable and more sustainable communities near transit stations and along transit corridors," RTA officials said in a press release.

A call for projects was held in September and October 2018 for eligible projects, which include transit-oriented development (TOD), a transit corridor plan or transit neighborhood mobility improvement plan. The RTA reviewed 14 applications and recommended nine projects.

Among them:
• the creation of a TOD plan for an area near a Metra station in Cary;
• the creation of a TOD plan for the areas surrounding Metra's Crystal Lake and Pingree Road stations;
• an examination of nine Metra stations across the region in an effort to diagnosis the reasons for low ridership; and
• the development of an implementation strategy for the Elevated Chicago Work Plan, which focuses on access to seven Chicago Transit Authority stations and other improvements.

The final program of projects will be announced March 21.

Meanwhile, Metra revealed plans to close Winnetka Station's ticket office Feb. 22 due to declining on-site ticket sales. Located on the Union Pacific North Line, the station sold an average of 610 tickets per month in 2018, including 432 in December.

The station — which serves about 740 customers each weekday — sells the fewest tickets of all the ticket agent-staffed locations on the entire system, Metra officials said in a press release.

Ticket sales have declined at many stations as passengers have switched to mobile purchasing. About 43 percent of riders now purchase tickets via the Ventra App, Metra officials said.