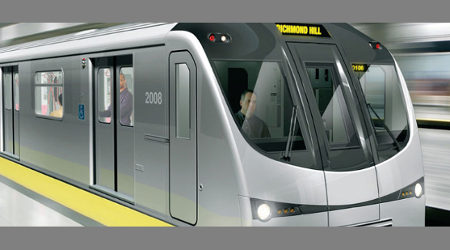 The Canadian government has pledged more than CA$36 million to support planning and preliminary engineering for the proposed 4.6-mile extension of the Yonge Subway line into southern Ontario's York Region.

The project calls for extending the subway from the existing Finch Station in Toronto to the Richmond Hill Center in York Region. The federal funds are part of the first phase of the "Investing in Canada" plan, which provides support public infrastructure across the country.

"I'm pleased that the federal government is helping York region and Metrolinx to advance the planning and design for the Yonge North subway extension, which is one of our priority transit projects," said Steven Del Duca, Ontario minister of transportation, in a press release.

For its part, the province of Ontario has committed CA$55 million for Metrolinx to work with the Toronto Transit Commission and local government agencies to continue planning and design work on the Yonge north subway extension.