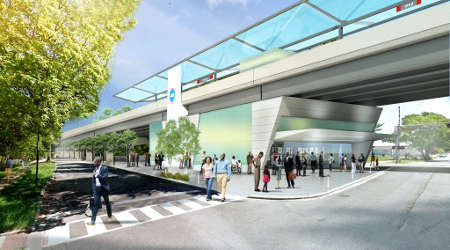 The Chicago Transit Authority (CTA) yesterday announced it advanced both the Red and Purple Modernization (RPM) Program and Red Line Extension (RLE) by selecting a design-build team and project manager.

The Chicago Transit Board approved awarding a $1.2 billion contract to a Walsh Construction Co.-Fluor Corp. team to engineer, design and construct the program's first phase: rebuilding century-old rail lines north of Belmont. The board also approved the award of a $20.9 million to HNTB Corp. to serve as program manager for the RLE, which calls for extending the Red Line south 5.3 miles from 95th Street to 130th Street.

Both projects are part of Mayor Rahm Emanuel's Red Ahead program, a series of projects aimed at improving the 22-mile Red Line — the CTA's busiest route, which is used by more than 75 million riders annually.

"The Red Line forms the backbone of the CTA and our city, and our investment in it will increase access to quality rail transportation for future riders and offer customers faster, more reliable service," said CTA President Dorval Carter Jr. in a press release.

The Walsh-Fluor team — along with lead designer Stantec Consulting Services and major subconsultant designers EXP, International Bridge Technologies and TranSmart/EJM Engineering — will design and build new elevated tracks along a 1.9-mile section on Chicago's northside. The team also will be responsible for reconstructing the Lawrence, Argyle, Berwyn and Bryn Mawr stations, building a rail bypass north of Belmont station, and installing a new signal system on 23 track miles between Howard and Belmont.

The $2.1 billion first phase of the RPM was announced in 2014 and is fully covered by federal and local funds. The CTA is performing advance utility relocation work, which includes removing wires and poles, and relocating utility equipment ahead of major construction that’s expected to start in 2019's latter half.

In January, CTA announced a preferred alignment that begins at 95th, travels south along Union Pacific Railroad tracks from Interstate 57, and then extends southeast from 119th Street to 130th.

The next major step for the RLE is the completion of a final environmental impact study, CTA officials said. The authority expects to apply to the Federal Transit Administration for entry into the two-year project development phase to pursue federal funding under the New Starts program. CTA plans to seek more than $1 billion in federal funds to support the RLE, which is estimated to cost $2.3 billion.