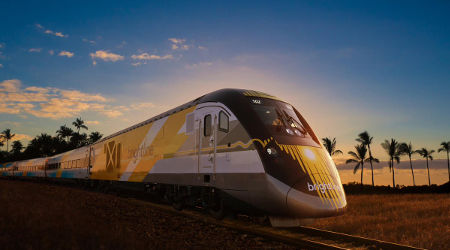 Brightline has received approval from the Florida Department of Transportation’s (FDOT) procurement office to negotiate a land lease to establish passenger-rail service between Orlando and Tampa.

The FDOT office's approval of the passenger-rail provider’s application gives Brightline 90 days to negotiate land lease terms with the Central Florida Expressway Authority (CFX) for a line along Interstate 4, according to the Miami Herald. The Orlando-Tampa route eventually would connect with Brightline’s existing line running between West Palm Beach and Miami.

Brightline was the only firm that submitted a proposal to FDOT this month to operate passenger-rail trains between Orlando and Tampa.

Brightline officials estimate the 88-mile Orlando-Tampa route would require 44-foot-wide spaces mostly along I-4, the Miami Herald reported. The line would run from from Orlando International Airport through Osceola and Polk counties to downtown Tampa, and feature stations in Orlando and Tampa, and in the Celebration and Lakeland areas.

Brightline officials expect to negotiate with utilities, local land owners and leaders of local communities along the route.

“This is an exciting next step in our efforts to expand intercity passenger rail in Florida. By connecting Florida’s major economic centers, Brightline provides a safe, efficient and productive way for residents and tourists to travel the state,” said Brightline President Patrick Goddard in an emailed statement. “We look forward to working with FDOT and CFX on strengthening Florida’s infrastructure in the next phase of this process.”