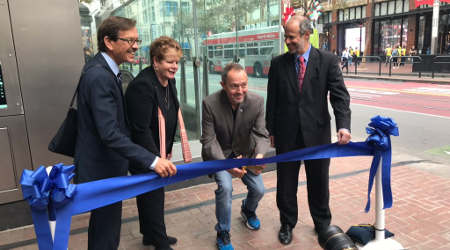 One canopy is above the Powell Street Station and the other is above the Civic Center Station. The structures were built as a pilot project, and BART plans to install more above all remaining 22 BART and the SFMTA entrances above the four downtown San Francisco stations.

Each canopy features a real-time digital display that shows train arrival times, a retractable gate, LED lighting and security cameras, BART officials said in a press release. The canopies are part of a larger project that calls for replacing 41 escalators at the Embarcadero, Montgomery, Powell and Civic Center stations.

The canopies are a state code requirement for new escalator investments, according to BART.

"The canopies mark a significant improvement," said BART General Manager Grace Crunican. "They will not only help protect our escalators from the elements like weather and debris, but from misuse because they can be locked at the street level each night when the stations close."