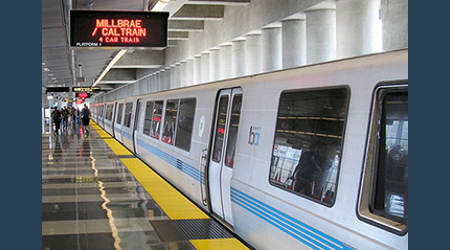 The first trains — which won't carry riders yet — will be used to test communication systems, tracks and software. This is known as the "static testing phase" and is a key step before opening the extension for passenger service, according to a press release issued by the Santa Clara Valley Transportation Authority (VTA).

VTA is overseeing construction for the Berryessa Extension, which is the first phase of BART's 16-mile Silicon Valley Extension.

Static testing along the Berryessa Extension will continue into 2018. Trains will run along the entire 10-mile route at speeds ranging from 5 mph to 80 mph, VTA officials said.

Several measures were built into the project to mitigate noise and vibration for neighboring communities during service operation. For example, the project features sound walls along the trackway, as well as vibration- and noise-absorbing products underneath the tracks.