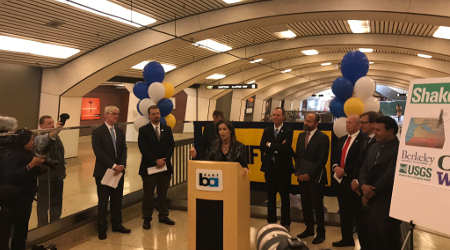 Known as ShakeAlert 2.0, the system is designed to provide up to tens of seconds of advance warning that the ground will begin shaking. The alerts enable BART to slow or stop trains ahead of major seismic activity.

During yesterday's demonstration, trains slowed to 27 mph, and stations and trains broadcasted an alert to passengers in a simulation of BART's response to a real ShakeAlert warning, according to an agency media advisory.

The system also can be used by manufacturers, utility companies and other organizations to establish automatic systems that will initiate actions to protect employees and equipment, BART officials said.

Over the past two years, California has provided $25 million to implement the system. To date, the federal government has provided $46.3 million for the earthquake warning system.