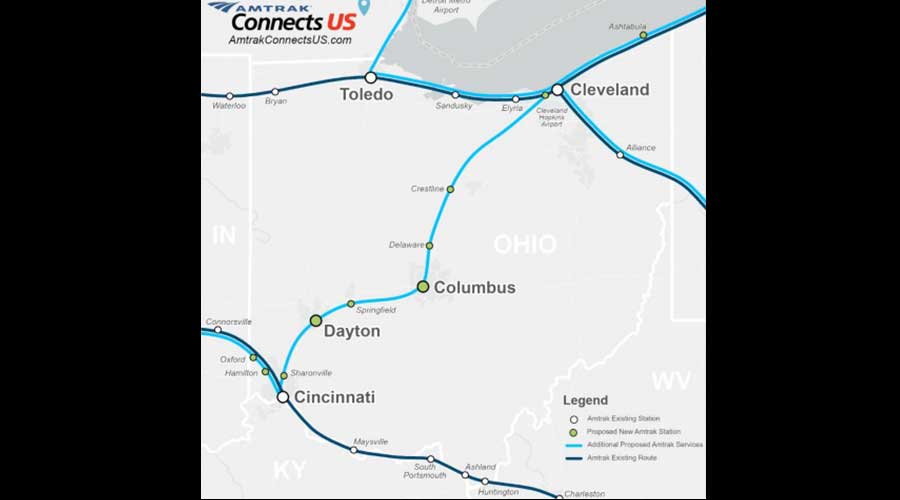 Central Ohio business and government leaders yesterday met virtually with Amtrak executives for a roundtable discussion of a proposed plan for passenger-rail service that would connect Columbus with Cleveland, Dayton and Cincinnati by 2035.

The proposed "3C+D" corridor is one example of example of the up to 160 communities in over 25 states that Amtrak envisions being able to serve over the next 15 years under its proposed expansion dubbed "Connect US."

The last time Cleveland, Columbus, and Cincinnati were connected directly by rail was in 1967. The three cities, commonly referred to as the "Three C's," are the largest in the state. Columbus’ metropolitan area is home to over two million residents, making it the second-largest metropolitan area in the country without Amtrak service.

Amtrak service on the 3C+D corridor would operate on track owned by CSX and Norfolk Southern Railway.

Among speakers at yesterday’s roundtable was William Murdock, executive director of the Mid-Ohio Regional Planning Commission (MORPC), which has been working for the past several years to advance passenger-rail service on the Chicago-Columbus-Pittsburgh corridor.

In addition to supporting the 3C+D corridor, MORPC and its partners are asking for the Chicago-Columbus-Pittsburgh corridor to be included in Amtrak's expansion. MORPC yesterday released 30 letters of support from community leaders who want expanded Amtrak service in Ohio.

"Columbus is the largest city in the United States without fixed rail service for passengers," Murdock said in a press release. “Not being on the national network puts us at a competitive disadvantage with other regions.”

Ensuring central Ohio is included in new Amtrak service "would mean new jobs and better access, and it would be an economic driver for the region’s communities — urban, suburban and rural — as well as the state of Ohio," Murdock added.