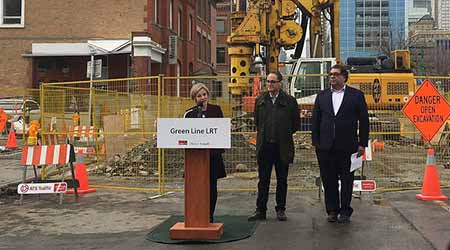 The province of Alberta and city of Calgary have reached an agreement to jointly provide CA$3 billion for the Green Line light-rail project, with an equal amount to be contributed by both governments.

The funding will be provided over an eight-year period to support the first stage of the Green Line, which is the most extensive light-rail transit (LRT) project in Calgary's history, province and city officials said in a press release.

The Green Line calls for adding 28.5 miles of track to the city’s existing 36-mile LRT system. The line will connect communities between Keystone and Seton to downtown and other Calgary destinations.

The Green Line’s first segment is projected to serve more than 60,000 riders daily and support new transit-oriented developments in Calgary. After the line is completed, daily ridership is forecast to reach an estimated 240,000 trips.

"Calgary is growing, it's dynamic, and this expanded transit project will help propel it into the future," said Alberta Premier Rachel Notley.

The Alberta government has already committed more than CA$345 million to LRT projects in the city, including nearly CA$148 million for early work on the Green Line and nearly CA$197 million for such previously approved projects as the 17 Avenue Southeast Transitway.