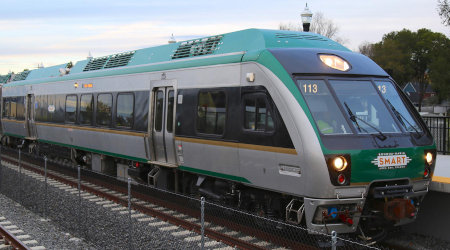 Since opening in 2017, the San Francisco Bay Area transit system has carried more than 1 million riders, many of them bicyclists, SMART officials said in a press release.

“The bicycling community has been very supportive, taking their bikes on board as part of their daily commute and for recreation,” said SMART Chairman Gary Phillips.

Passengers traveling from San Rafael to the Larkspur Ferry in California utilize a rehabilitated Cal Park Tunnel that provides a bicycle and pedestrian connection. SMART, which owns the tunnel land, plans to return rail travel to a separate portion of the tunnel in a 2.2-mile rail extension slated to open in late 2019.

Work is underway on two new stations in Larkspur and in downtown Novato.