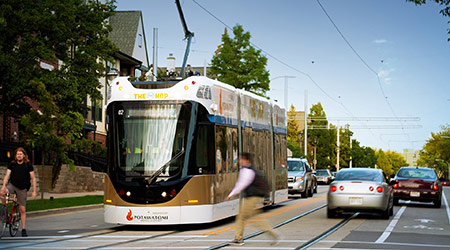 The Milwaukee Streetcar system known as The Hop reported last week a malfunction occurred in its automatic passenger counter (APC) system, which has affected ridership calculations so far for 2019.

In reviewing ridership data captured this year, streetcar officials discovered "numerous malfunctions of the APC system resulting in large blocks of missing data," they said in a press release.

Ridership data is missing for much of February and early March, which means accurate ridership totals will be unavailable for those months, officials said.

"We've worked diligently with the APC system's manufacturer to recover the data from January, which shows a total of 49,501 rides," they said, noting that the total reflects a decline in ridership number from November and December 2018.

Streetcar officials attribute the decline to the extreme cold weather in January, when temperatures in Milwaukee reached 20 to 30 degrees below zero on some days.

The Hop began serving riders in early November 2018. Combined with the first two months of operation plus January's numbers, the streetcar averaged daily ridership of 2,105 people.

"Our priority now is to ensure the APC is functioning as designed so that we can continue compiling accurate data moving forward," The Hop officials said.

Meanwhile, Milwaukee news media reported last week that city officials are planning to extend the streetcar route to the Wisconsin Center — the city's downtown convention center — in time for the Democratic National Convention that will be held in Milwaukee in July 2020.

Construction on the extension is anticipated to begin this year, according to local news reports.