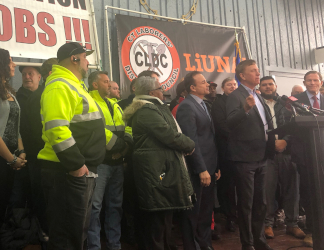 Connecticut Gov. Ned Lamont is putting forth two proposals to fund a modernization plan for the New Haven commuter-rail line.

On March 1, Gov. Lamont told transit advocates who met for a rally in support of the state’s rail system that despite millions of dollars worth of investment in the New Haven line over the past decade, the line has aging track and bridges that have led to speed restrictions.

“Our aging infrastructure is slowing our state's transportation system down and causing significant congestion — and it's impacting us economically," Lamont said in a press release. “Connecticut residents spend 81,845 hours stuck in traffic annually. This damages our reputation and impacts the decisions businesses make when they are considering locations for growth. In order to get Connecticut growing again, we need to get Connecticut moving again.”

The state’s transportation system is primarily funded by gasoline taxes, but Lamont has submitted two proposals to the General Assembly to return tolls to Connecticut in order to fund the system. One option would charge tolls on trucks and is anticipated to generation $200 million annually; the second option would apply to trucks and passenger cars and is anticipated to generate $800 million annually.

The New Haven Line is owned by the state of Connecticut and operated by MTA Metro-North Railroad under contract with the Connecticut Department of Transportation. In addition to its main corridor from New Haven, Connecticut, to New York City, the line also consists of three branchs to New Canaan, Danbury, and Waterbury. It is the oldest of Connecticut's three commuter-rail lines.