MTA: Stations on way up in the Bronx; crime on way down in the rail system 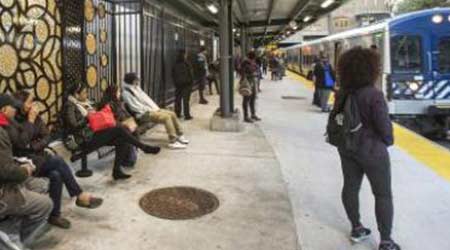 Empire State Development will work with the MTA on project planning and expedition, while Amtrak and the MTA will jointly study the feasibility of Amtrak running several trains daily from Long Island to Penn Station, and continuing either to Boston or Washington, D.C. Through the Penn Station access project, MNR trains would travel to Queens, then merge with MTA Long Island Rail Road's (LIRR) route and proceed through the East River Tunnels into Manhattan and west to the station.

"Amtrak's willingness to negotiate with the MTA will put the east Bronx Metro-North expansion back on schedule and bring us one step closer to expanded commuter rail options in the communities that need them the most," said Bronx Borough President Ruben Diaz Jr. in a prepared statement.

The stations would be built at Hunts Point, Parkchester/Van Nest, Morris Park and Co-op City. The project also would include new tracks and switches; power, signal and communications work; and various infrastructure upgrades.

During a recent MTA board meeting, the Metro-North Committee approved a $35 million contract with HNTB New York Engineering and Architecture to provide preliminary engineering and design services for the project. The full board will consider the contract tomorrow; the board's action is contingent on similar approval by Amtrak's board.

Meanwhile, the MTA also announced yesterday that crime statistics for 2018 were the lowest in the 20-year history of its police department, besting the all-time-low figures reported in 2017. The police department patrols about 5,000 square miles for MNR, LIRR and the Staten Island Railway.

Inter-agency cooperation on anti-terrorism and anti-crime efforts with regional, state and federal law enforcement agencies played a role last year, MTA officials said. In addition, increased officer visibility at stations and platforms, and safety campaigns designed to raise awareness and prevent victimization — such as the See Something, Say Something and Safeguard Your Electronics initiatives — helped drive down crime, they said.