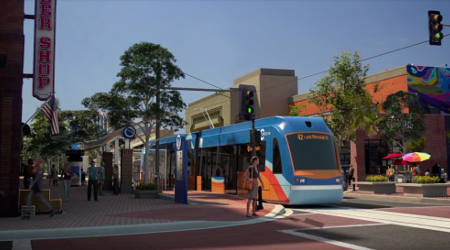 The streetcar will operate between Metrolink's commuter-rail service at the Santa Ana Regional Transportation Center and Harbor Boulevard in Garden Grove, California. The streetcar also will connect with several of the county's busiest bus routes along the way, OCTA officials said in a news release.

The project's cost is estimated at $407 million, with funding coming from federal and state sources and from Measure M, which is Orange County's half-cent sales tax for transportation improvements.

The Federal Transit Administration is considering a full funding grant agreement that would cover about half of the project's cost.

Since OCTA met all federal guidelines during the project's development, FTA officials gave the agency "pre-award authority" to move forward with the purchase of vehicles and the construction contract. In March, OCTA's board approved a $51.5 million contract with Siemens Industries Inc. to provide eight S70 model streetcars for the system.

The streetcar is expected to carry more than 7,300 passengers each day within its first year of operation, according to OCTA.

Construction is slated to begin later this year, with testing and operations starting in 2021.

To learn about other new streetcar systems in the United States, read this feature in Progressive Railroading's September issue.