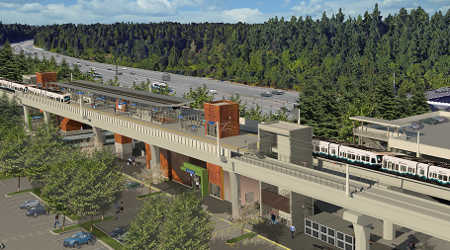 The agency is providing $100 million of appropriated fiscal-year 2018 funds to Sound Transit's Link extension to Lynnwood, Washington. The funding is in addition to another $100 million appropriated by Congress in FY2017.

The FTA and Sound Transit need to finalize a $1.17 billion full funding grant agreement (FFGA) before it receives the first two installments, Sound Transit officials said in a news release.

Meanwhile, the FTA also has set aside $98,955,409 for the Orange County Streetcar in Santa Ana and Garden Grove, California, according to a report in Passenger Transport, the American Public Transportation Association's (APTA) newspaper.

The $407.76 million OC Streetcar project is slated to launch service in 2021, as reported in Progressive Railroading's recent feature on streetcars.

The association expects that FTA will submit (FFGAs) for both of the "New Starts" projects in the near future.

"We are encouraged that FTA is moving forward with these CIG projects, including two New Starts, in fiscal-year 2018," said APTA President and Chief Executive Officer Paul Skoutelas. "APTA urges the administration to expedite action on other CIG grants."

The FTA has yet to allocate more than $1 billion for other CIG projects, according to APTA.