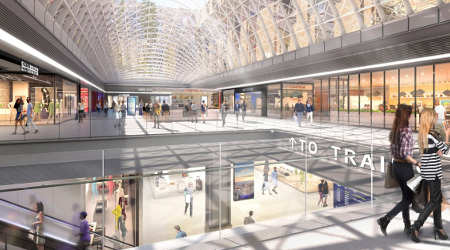 Situated at 33rd Street and 7th Avenue, the entrance would be designed to accommodate tens of thousands of LIRR passengers each day. Crews will build new stairwells and three new escalators to improve the movement of passengers.

In addition, the LIRR's main concourse will be widened from its current 30 feet to 57 feet to allow easier access to trains and reduce overcrowding.

Meanwhile, Cuomo also announced the completion of the structure for the nearby Moynihan Train Hall's midblock skylight.

Slated for substantial completion by 2020's end, the Moynihan Hall is being built across the street from Penn Station at the site of the James A. Farley Post Office Building.

The 92-foot high skylight will rest on the building's steel trusses. The steel structure of the building's second signature skylight located above the midblock hall also has been completed, with glass installation underway.

"For years there has been talk about transforming Penn Station, but no action, forcing New York's commuters and visitors to endure congested and potentially unsafe conditions for far too long," Cuomo said in a press release. "The projects currently underway, including a new, state-of-the-art entrance, will not only turn Penn Station into a world-class transit hub, but they will ease the flow for riders and improve the overall passenger experience for all who pass through."