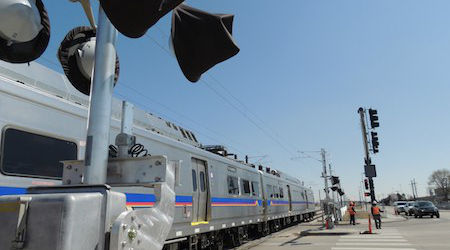 This week, the Federal Railroad Administration cleared the agency to run as many as six trains on the line for 10 hours each day. Eventually, RTD aims to simulate the full daily service schedule of nearly 21 consecutive hours.

Official start dates for the full service simulation and passenger service haven't yet been determined.

"We are excited to see G Line testing ramping up," said RTD Chief Executive Officer and General Manager Dave Genova. "Safety remains crucial during this time, and while we know that people are as excited as we are to see many trains on the alignment, we ask that they keep an appropriate distance and respect the work taking place on their behalf."

In late July, RTD received approval from the Federal Railroad Administration to begin the next phase of testing along the 11.2-mile G Line. The commuter-rail route originally was slated to open in fall 2016 but was delayed due to concerns about the crossing technology it shares with the University of Colorado A Line, The Denver Post reported earlier this year.