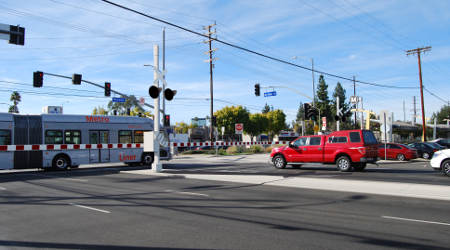 The improvements are necessary to prepare the line for its eventual conversion to light rail, Metro officials said in a press release. Orange Line buses operate along an exclusive right of way between North Hollywood and Chatsworth, California.

In the interim, the gates will enable Metro to boost the buses' operating speeds at intersections from 15 mph to 45 mph. The gates will be similar to those used on Metro's Gold, Blue and Expo light-rail lines.

Metro's board also approved plans for building two busway and bicycle grade separations at Van Nuys and Sepulveda boulevards, which are the two busiest streets along the Orange Line corridor. The agency will build stand-alone bridges and new aerial stations to separate automobile and pedestrian traffic.

"We are now planning short- and long-term investments to take this popular Valley transit line from rubber wheels to steel wheels, making it much safer, faster and capable of accommodating more riders in the years ahead," said Metro Chair Sheila Kuehl.

The project will be funded with $286 million in Measure M funds and $75 million in Senate Bill 1 state gas tax dollars, Metro officials said. The agency expects to break ground in 2019, with the new gates in operation by 2025.

The Orange Line is scheduled to become a light rail by 2057, but Metro is exploring ways to accelerate that project via public-private partnerships.

In March 2017, the agency received an unsolicited proposal from Fluor Enterprises Inc. to accelerate conversion of the bus route to a light-rail line. In October 2017, Metro's board approved a plan to study safety improvements to make way for the light-rail conversion.