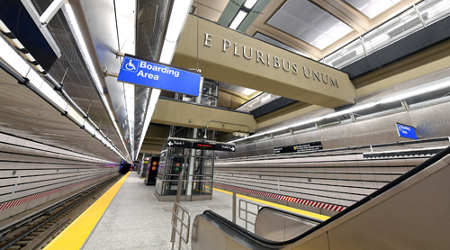 Only 24 percent of MTA New York City Transit's (NYCT) 472 subway stations are accessible to riders with disabilities, according to a recent report by New York City Comptroller Scott Stringer.

That figure is the lowest among U.S. metropolitan rail systems, Stringer's report stated.

Although some U.S. rail systems were built after the Americans with Disabilities Act (ADA) passed in 1990, subway systems in Boston and Chicago are nearly as old as New York City's but are more accessible, according to the report.

"Only in New York are 640,000 residents being deprived of access to a rail system that is already built in their neighborhoods," the report stated. "Only in New York is the utility and reach of the subway system being systematically squandered."

Improving accessibility could help increase the reach of the subway system and relieve overcrowding at key stations that serve a disproportionate share of mobility-impaired riders. What's more, the impact of accessibility investments would rival MTA's recent cluster of system expansion projects, Stringer said in the report.

For instance, the Second Avenue Subway line and other recent expansions are expected to serve less than 500,000 riders — far below the number of riders restricted from using existing subway lines due to lack of accessibility.

Of the 122 neighborhoods served by MTA New York City Transit's subway system, 62 have no accessible station.

Fifty-five of those "ADA transit deserts" are in the Bronx, Brooklyn and Queens, Stringer wrote. Nonetheless, those areas are home to nearly 200,000 mobility-impaired residents and more than 341,400 seniors above age 65.