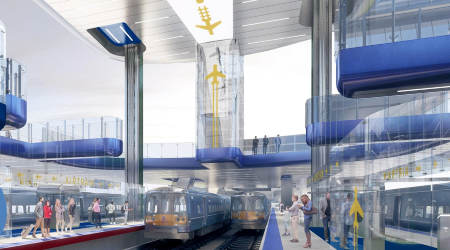 The legislation marks another critical step toward establishing a rail link between Midtown Manhattan and LaGuardia. AirTrain advocates believe the service would help reduce motor vehicle congestion and delays for passengers traveling to and from the airport.

The service would feature less-than-30-minute trips between LaGuardia and New York Penn Station or Grand Central Terminal. It also would provide rail access from all of Long Island via the LIRR and the 7 subway line, Cuomo administration officials said in a press release.

"AirTrain LGA will set an example of comprehensive transit infrastructure for the rest of the nation, and will pay dividends for decades by connecting riders to transit hubs across the Metropolitan area, boosting passenger growth across all airlines, and providing a more efficient means of travel for generations to come," said Cuomo.