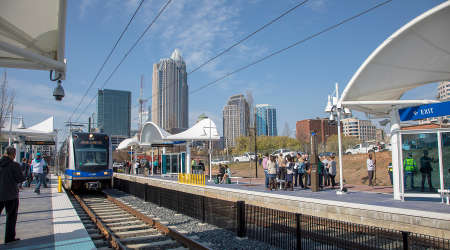 The largest infrastructure project in Charlotte's history, the $1.1 billion extension runs from the 7th Street Station in the Center City area to the University of North Carolina at Charlotte campus. The project features 11 new stations.

The extension is expected to generate $4.4 billion in economic development in the area by 2035, CATS officials said in a press release.

"This project has been a profound example of what Charlotte can accomplish through collaboration, commitment and diligence," said CATS Chief Executive Officer John Lewis. "A strong public transit system is integral to a thriving community and I am proud to be part of this chapter in Charlotte's history."

The Blue Line extension opened after nearly five years of construction. Originally, the project was slated to open in August 2017, but CATS pushed back the opening due to construction coordination challenges and other issues.

Late last month, the agency held a ribbon-cutting ceremony ahead of the official opening.