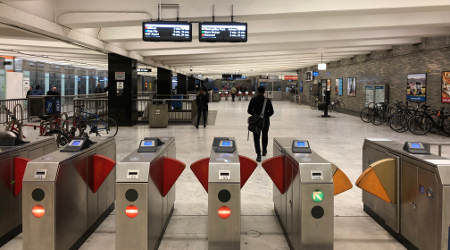 The screens provide real-time departure information, as well as updates on current service advisories or disruptions.

The goal is to give riders up-to-the-minute information prior to purchasing fares, BART officials said in a press release. If there are significant delays, for example, passengers can decide whether to delay the trip or find a different travel option.

Riders also can avoid paying "excursion fares," which enable people to tour all 44 BART stations for up to three hours so long as they enter and exit the same station. Passengers could be charged the $5.75 excursion fare even if they bought only the fare and left the station immediately after.

The eight-month pilot will cost $130,000, with funds coming from BART and the Federal Transit Administration. Later this month, BART will conduct customer surveys and revise the monitors' design accordingly.

If the displays "prove popular," the agency will seek funding to expand it to other stations, BART officials said.