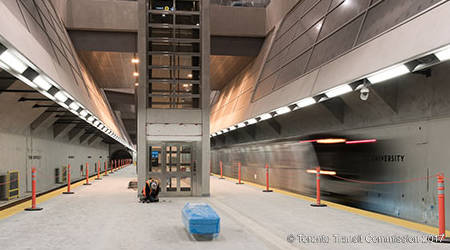 Known as the Toronto-York Spadina Subway Extension, the new line will include six  subway stations and three commuter parking lots. The CA$3.18 billion project is an extension of TTC's Line 1 subway route.

"The extension will also be the first time ever that the TTC subway system will cross a municipal border, linking Toronto and York University with York Region," said TTC Chair Josh Colle in a press release.

The Toronto-York Spadina extension runs from the Downsview Park Station in Toronto to the Vaughan Metropolitan Center along Highway 7 in York.

TTC powered up the third rail on the extension earlier this year.