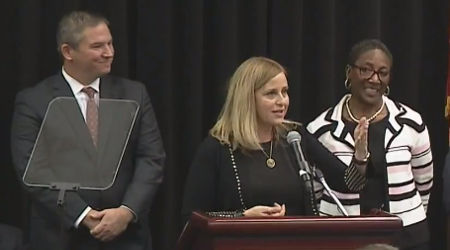 Nashville Mayor Megan Barry on Tuesday unveiled a $5.2 billion infrastructure proposal that would include a new 26-mile light-rail system.

The plan would be funded by four tax increases that Davidson County residents would need to approve in a May 2018 vote.

The light-rail system would be built on Nashville's busiest corridors, which include Gallatin Road, Nolensville Road, Charlotte Avenue and Murfreesboro Road. The plan also calls for using existing track to provide light-rail service to Buchanan Street near Tennessee State University.

"This comprehensive transportation solution will connect more neighborhoods with each other and open the door even wider to the city's job, education and entertainment centers," Barry said in a press release.

Beginning Oct. 26, Barry's office will hold a series of public meetings about the plan in neighborhoods along the proposed light-rail corridors.

After the meetings, the Nashville Metro Council will consider an ordinance to authorize putting the proposed tax increases on a ballot.

In April, Barry announced her support for a light-rail system in the city.