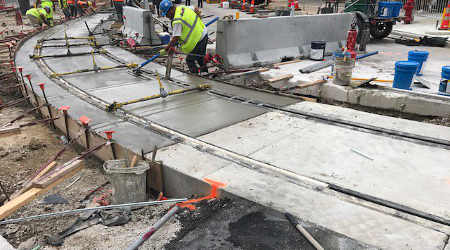 Milwaukee's Department of Public Works (DPW) has selected Transdev Services Inc. as the operations and maintenance contractor for the Milwaukee Streetcar.

Under the agreement, Transdev will be responsible for all day-to-day operations, as well as vehicle and facilities maintenance. The firm also will hire and train staff, maintain track and implement safety programs.

Transdev will subcontract for vehicle maintenance with Brookville Equipment Corp., which in November 2015 was chosen to build streetcar vehicles for Milwaukee.

"We are confident that Transdev will be an excellent operator of the Milwaukee Streetcar and offers the experience and know-how needed to make the system an unqualified success," wrote DPW Commissioner Ghassan Korban in a Sept. 5 memo.

Transdev  operates New Orleans' streetcar system, along with 21 other fixed-rail systems around the world.

The company also is "highly experienced" in starting up new systems, including Detroit's QLINE streetcar, Korban added. The company last year obtained a contract to operate and maintain the QLINE system.

Transdev's Milwaukee Streetcar contract went into effect in late August and will run through December 2023. The agreement calls for five years of revenue service operations starting in late 2018.

Annual contract costs for the streetcar's first phase and lakefront extension are about $3.6 million, according to Korban's memo.

The department chose the firm following a competitive request for proposals (RFP) process that began in February 2017. The RFP process attracted five firms and agencies from the United States and Europe.

A committee evaluated the companies based on experience and qualifications, past performance, understanding of the project, and approach and contract costs.