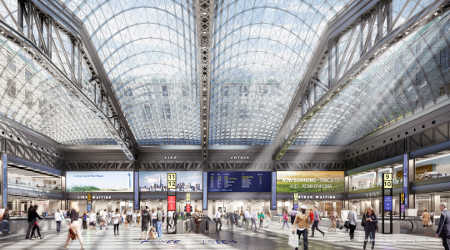 The loan was issued through the department's Transportation Infrastructure Finance and Innovation Act (TIFIA) program.

The project calls for constructing a new train hall at the James A. Farley Post Office building across the street from New York City's Penn Station. The new hall is expected to relieve congestion at Penn Station, which is the busiest U.S. transportation facility, averaging 650,000 passengers each weekday.

The Moynihan Train Hall will serve as the arrival and departure station for all Amtrak passengers in New York City, USDOT officials said in a press release. In addition, the hall will include ticketing and other facilities for MTA Long Island Rail Road.

The total cost of the work is estimated at $1.85 billion. Amtrak, the Metropolitan Transportation Authority, Port Authority of New York and New Jersey, and New York State Urban Development Corp. will cover the remaining $1.3 billion.

"This TIFIA loan will help transform the James A. Farley Post Office building in Manhattan to include a modern, state-of-the-art train station, delivering extensive improvements for passengers in easing congestion and delays," said U.S. Transportation Secretary Elaine Chao in a press release. "This is an important investment in the Northeast Corridor’s rail service and the economic vitality of the region."

Construction of the new hall has begun and is expected to wrap up in December 2020.