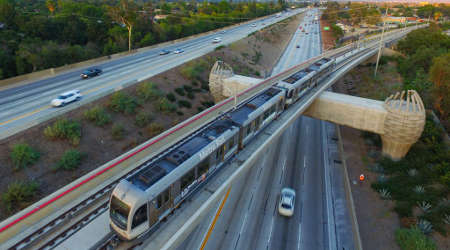 The board also approved partnership agreements that establish a funding plan and shared roles and responsibilities between Metro and the Foothill Gold Line Construction Authority, the agency tasked with building the extension.

Metro will fund the extension from Glendora to Claremont, while the construction authority will use other funding to build the line's final stretch to Montclair, California.

The extension will be the first rail line to begin construction as part of the Measure M ballot initiative that Los Angeles County voters approved in November 2016. The measure calls for a half-cent sales tax to fund transportation projects in the region.

To date, the construction authority has cleared the project environmentally and completed advanced engineering for the entire alignment. The authority expects to award its first contract for advanced utility relocation later this year, with the project's official groundbreaking expected to take place in October.

Metro plans to open the extension by 2027.