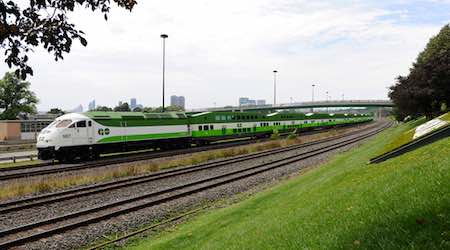 Metrolinx and Infrastructure Ontario (IO) have issued a request for qualifications for companies interested in building and financing a double-track project on GO Transit's Barrie Line.

The scope of work includes building a second track between Toronto's Union Station and a stop in Aurora, Ontario. The chosen firm also will perform grading, carry out track and signal upgrades, build noise and retaining walls, and expand bridges.

Teams that qualify will be invited to respond to a request for proposals in fall 2017.

The project will follow IO's alternative financing and procurement model, which leverages private-sector partnerships to modernize and expand Ontario's aging infrastructure. Under the model, provincial ministries or project owners establish the scope and purpose of a project, while the private sector carries out the design and construction work.

The Barrie Line project is part of Metrolinx's efforts to support the GO Regional Express Rail (RER) program, which calls for electrifying core segments of the GO rail network by 2024 or 2025.

RER will enable Metrolinx to provide faster and more frequent transit service across Toronto and Hamilton, agency officials said in a press release. However, several major infrastructure upgrades are needed to support that service.