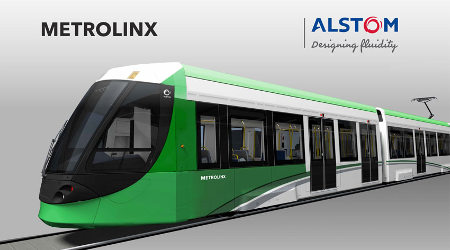 The order is valued at more than 529 million Canadian dollars ($387 million in U.S. dollars).

Seventeen of the units are reserved for the Finch West light-rail project. The remaining 44 are for the Eglinton Crosstown line, which is slated to open in 2021.

Bombardier Transportation already has agreed to build the cars for the Eglinton Crosstown project; Alstom's units only will be used on the line if Bombardier isn't able to deliver the units on time.

The order with Alstom will serve as a "safety net if it turns out Bombardier is unable to fulfill its contract," Metrolinx officials said in a statement.

If the Alstom vehicles aren't needed for Eglinton Crosstown, they'll be reassigned for the Hurontario light-rail transit project.

Metrolinx turned to Alstom for the new vehicles due to concerns about Bombardier's ability to deliver the units on time, the Financial Post reported.

The Citadis Spirit can operate at temperatures as low as negative 36.4 degrees Fahrenheit. Designed for the Canadian market, the vehicle also is fitted with "winterized solutions" to ensure performance in cold weather. These solutions include reinforced insulation and a strong HVAC system.

The low-floor units can carry 321 passengers each and provide easy access from the street or curb, Alstom officials said in a press release.