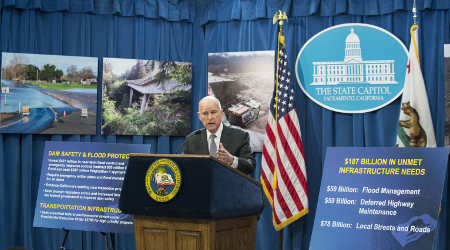 California Gov. Jerry Brown last week announced a major plan to address the stress extreme weather has had on the state's infrastructure systems, including transportation.

Part of Brown's initiative includes a request to President Donald Trump to assist the state by expediting environmental review for 10 projects: nine high-priority transportation projects and reconstruction of the Oroville Dam spillways.

"Our aging infrastructure is maxed out," said Brown in a press release. "We can take some immediate actions — and we will — but going forward we'll need billions more in investment."

Among the nine transportation projects in Brown's request are Orange County's plan to build a 4.2-mile streetcar line between the Santa Ana Regional Transit Center to a new hub in Garden Grove; and a portion of the California high-speed rail project that would build the Silicon Valley-to-Central Valley connection and advance rail improvements to benefit commuters in the Burbank-to-Anaheim segment.

Brown also took the opportunity to reiterate his support for the state's high-speed rail project and for Caltrain's electrification project, which he called a "no-brainer."

Brown's request to the president includes projects on an initial list of 51 priority infrastructure plans that California submitted to the federal government earlier this month.