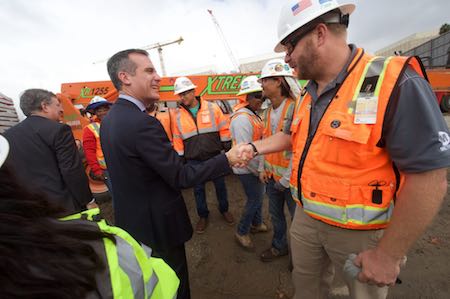 The Los Angeles County Metropolitan Transportation Authority (Metro) has completed decking for the future Wilshire/La Brea subway station on the Purple Line extension, the agency and its contractor announced yesterday.

The work wrapped up six weeks ahead of schedule, Metro officials said in a press release.

The project included excavating a portion of Wilshire Boulevard and replacing it with concrete deck panels to serve as a temporary street surface while underground station excavation continues below.

A Skanska, Traylor and Shea joint venture is the contractor.

The Purple Line extension project's first phase will extend the subway 3.9 miles west from its current terminus at Wilshire/Western to Wilshire/La Cienega, with stations at La Brea and Fairfax avenues.

The agency on Oct. 14 closed a portion of Flower Street in downtown L.A. to carry out the work. This marked the first of up to 14 weekend-only closures, according to a Metro press release.

As part of the "cut and cover" work, the agency's crews will remove the roadway and install steel beams and a temporary installation of deck panels. These panels will serve as a temporary roadway to facilitate excavation and construction of the Regional Connector's underground tunnel box.

The Regional Connector is a 1.9-mile light-rail extension that'll connect the Blue, Expo and Gold lines in downtown L.A. Expected to serve 88,000 riders each day, the new line is projected to save commuters up to 20 minutes by reducing transfers. The project includes three new stations.