The Regional Transportation District of Denver (RTD) on Friday opened the 23-mile University of Colorado A Line commuter-rail route, which marks one of the first transit projects built by a public-private partnership in the United States.

The $1.2 billion line, which runs from downtown Denver to Denver International Airport, is part of the $7 billion FasTracks expansion plan that calls for building 122 miles of new rail routes, among several other transit improvements. 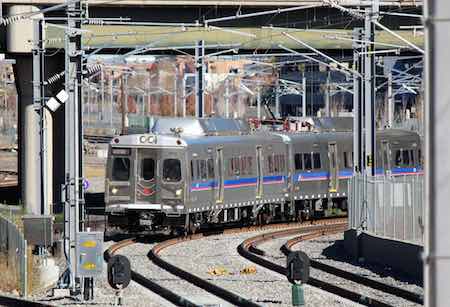 Trains will make the journey from Union Station to the airport in 37 minutes, or about half the time of driving, Federal Transit Administration (FTA) officials said in a press release.

The A Line is also part of the $2 billion Eagle Public-Private Partnership (P3) project, which includes the under-construction Gold Line commuter-rail project, a commuter-rail maintenance facility and electric multiple-unit vehicles. The FTA is contributing $1 billion through its capital investment grant program toward that project, while the U.S. Department of Transportation is providing $62 million in other funds.

The remaining costs are covered by state and local sources, including a private contribution.

Under the P3 arrangement, a private team known as Denver Transit Partners agreed to fund a share of the project, assuming much of the risks and allowing RTD to minimize public costs for construction. The team includes Balfour Beatty Rail, Parsons Brinckerhoff, Systra, Wabtec Corp. and others.