The Southeastern Pennsylvania Transportation Authority (SEPTA) has scheduled three public meetings to review plans for a project to extend the Norristown High Speed Line into King of Prussia and Upper Merion Township, Pa.

At the meetings, representatives from SEPTA and the King of Prussia Rail Project consultant team will give an overview of recent activities, including the selection of the recommended locally preferred alternative, which was chosen from five possible routes.

The preferred route runs along a portion of the Pennsylvania Turnpike right-of-way and terminates at North Gulph Road adjacent to the Valley Forge Convention Center and Casino, SEPTA officials said.

"The extension of the Norristown High Speed Line into King of Prussia would be an asset for this area's growing travel, business and shopping needs and it is important for the public to come to the meetings and provide their feedback on the project," said SEPTA General Manager Jeffrey Knueppel.

Launched in fall 2012, the King of Prussia Rail Project includes the preparation of a draft environmental impact statement, which is scheduled to be released in December 2016.

A December 2015 report found that the extension could add $540 million to $946 million to King of Prussia's real estate value over 20 years. 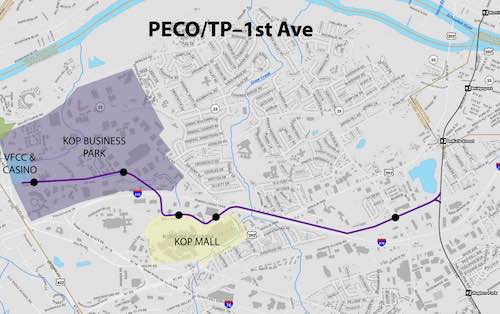