The teams were selected based on criteria identified in a request for qualifications process that began in September 2015. Selection criteria included construction capability, experience and financial capacity to deliver a project the size and complexity of the Finch West, Infrastructure Ontario officials said in a press release.

The Finch West project includes 6.8 miles of new dedicated light-rail track between Humber College and the Finch West Subway Station on the Toronto-York Spadina Subway Extension. The project also calls for construction of a maintenance and storage facility for light-rail vehicles.

The teams will spend most of this year preparing proposals detailing how they'll design, build and finance the project, as well as their plans for maintaining the light-rail system for a 30-year period.

As part of their proposals, the teams also must demonstrate how they'll support plans to increase apprenticeships and opportunities for local companies, as well as ensuring compliance with Metrolinx's "design excellence" and community benefit principles, Infrastructure Ontario officials said.

Slated for completion in 2021, the project is being delivered using Infrastructure Ontario's alternative financing and procurement model, which transfers risks associated with design, construction, financing and maintenance onto the private sector. 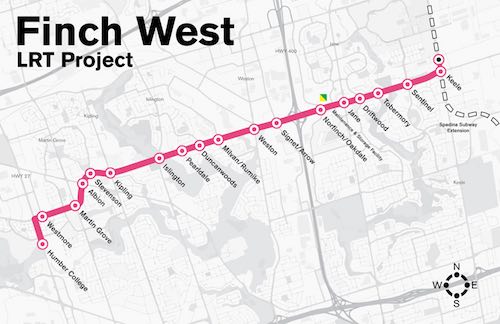