The move represents the first step in receiving federal project approval under the CIG program and potential eligibility for federal construction funds.

The project development phase involves environmental analysis, preliminary engineering and documentation needed to advance the plan to the next phase of the FTA's CIG program.

"This marks a significant milestone in our efforts to provide enhanced transit services to a community with high transit ridership and supports neighborhood revitalization and connectivity between northwest, downtown and south areas of Phoenix," said Valley Metro Rail Chair Thelda Williams.

The South Central Extension received federal recognition and funding in 2014 with a Transportation Investment Generating Economic Recovery (TIGER VI) grant from the U.S. Department of Transportation (USDOT). Matching funds from Phoenix provided the financial backing to begin an environmental assessment, which is scheduled for submittal to the FTA in early 2016.

In addition, the South Central Extension is one of seven projects identified by the USDOT as a participant in the LadderSTEP Pilot Program.

The proposed line would extend Valley Metro's light-rail system 5 miles south from downtown Phoenix to Baseline Road, according to a project "report card" issued by the agency in August. 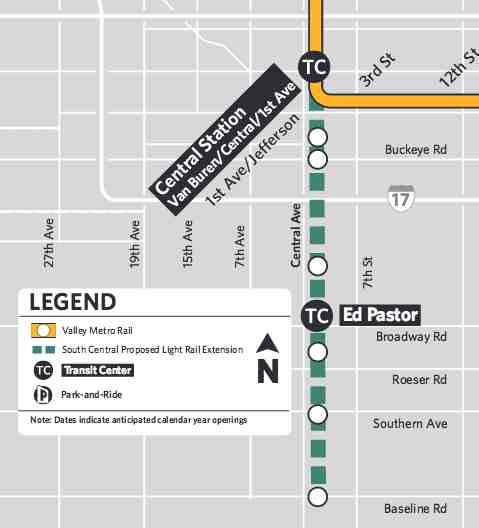