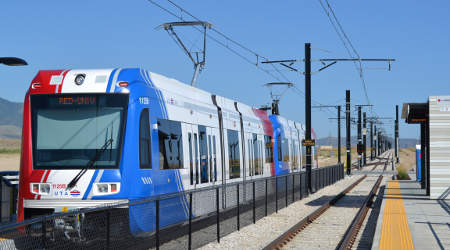 As the rail cars move along the UTA's Red and Green lines, the monitors collect information about airborne pollutants such as ozone, particulate matter and greenhouse gases in the Salt Lake Valley, says University of Utah Postdoctoral Scholar Logan Mitchell.

"The idea's been around for a long time to put these kind of instruments on public transit," he says.

University scientists installed the first air quality monitor on a single TRAX car in 2014. Last year, a second car was equipped with a monitor.

Since the trains are powered by electricity, they don't release emissions that could interfere with the air quality data. In addition, researchers are able to evaluate air quality across different altitudes and population densities throughout Salt Lake City.

One finding of interest? Researchers learned that particulate matter is highest in the city center during the winter time, while ozone is higher on the edges of the city in the summer.

In general, the project is helping helping university scientists understand the variation of air pollutants across the region, Mitchell says.

While similar studies have been carried out in Europe, the TRAX project is a first in the United States.

And the TRAX study is unique because most of the air quality data that's been gathered so far has come from a single stationary monitor set up by the U.S. Environmental Protection Agency, Mitchell says. The monitor has been collecting data since the 1990s, he estimates.

"It's really valuable to have that long-term record of information, but you just can't see all the spatial patterns that you can see in the TRAX data," he says.

UTA's role in the project is simply to provide the rail cars and schedule monthly preventative maintenance inspections of the monitoring equipment; the university takes care of the actual maintenance work.

The agency also is responsible for ensuring that the trains are running on different lines to maximize coverage and data collection throughout the Salt Lake Valley, said UTA spokesman Remi Barron in an email

Although UTA's role is limited, the project could help locals learn about the environmental benefits of public transit, agency officials believe.

"UTA's hope is that not only will the study goals and objectives result in a greater understanding of the air quality challenges facing the Wasatch region, but it will also increase awareness of the green benefits of public transportation and encourage the next generation of UTA riders," Barron said.

"There's new research coming out that's showing that air quality can affect dementia. So there's some serious health impacts and a lot of premature mortality that goes along with air pollution," he says.

The study also could be replicated in other cities with above-ground light-rail systems, such as Denver and Portland, Mitchell says.

University researchers are looking for funding to keep the project going. At present, the university is funding the study with money borrowed from other projects, Mitchell says, but he's hopeful the air quality project will continue for decades to come.

"The longer it goes, the more valuable it gets," he says.