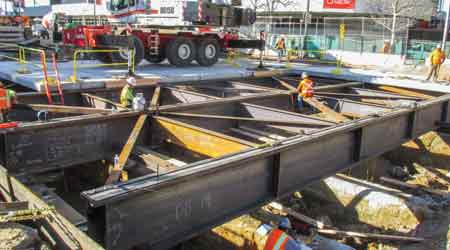 When it's finished in nearly eight years, the Los Angeles County Metropolitan Transportation Authority's (Metro) Purple Line subway extension will be a heavy-rail line between the Wilshire Boulevard Western Station and the VA Hospital Station in West Los Angeles. Ultimately, the project — also known as the Westside Purple Line Extension — involves the construction of 9 miles of track and seven stations.

The long-awaited project will connect West Los Angeles to Metro's expanding rail network, which agency officials believe will improve transportation for residents and visitors in a city that is known as one of the most traffic-congested communities in the United States.

One of the agency's priority projects, the extension’s first phase is funded by Measure R funds, federal "New Starts" matching funds and a low-interest Transportation Infrastructure Finance and Innovation Act loan from the U.S. Department of Transportation.

The first phase's engineering and construction work is managed by Skanska, Traylor Brothers Inc. and J.F. Shea Construction Joint Venture (STS), which was awarded the $1.6 billion design-build contract in 2014. Contract procurements were completed in September 2015.

Phase I construction is expected to conclude in June 2023, with testing, pre-revenue and revenue service slated for early November 2023.

Project to hit milestones this year

Three advance utility relocation contracts have been completed and construction on two of the three underground stations is underway, said Gary Yeo, Metro’s project controls supervisor-program control, in an email.

At the Wilshire/La Brea Station site, crews are constructing supports for the excavation under the deck. At the Fairfax station, temporary street decking has begun. Also, ground treatment for the tunnel cross passages are ongoing, said Yeo.

In terms of Phase I’s engineering, design and construction work, the design-build team is employing an integrated project team model, said Sotero in an email. The model allows the team to use the best resources from Metro and the engineering and construction management consultants, he said.

The project also involves the use of "Revit modeling," in which all engineering disciplines are designed in one model during the advanced preliminary engineering phase, said Sotero. STS is completing final design using this same model, he added.

"This approach is unique in the rail-transit industry and has resulted in producing a high-quality final design in a very short time frame," said Sotero. “The use of the model in planning construction is also anticipated."

From an engineering and design perspective, the extension project has involved unusual ground conditions because it's being built in the La Brea Tar Pits area.

For example, excavation work in November 2016 near the location of the future Wilshire/La Brea station turned up parts of ancient mammoth fossils, including a partial skull and tusks.

"Because of the asphaltic conditions, a paleontological monitoring zone has been identified, where the contractor will need to excavate in thin layers — six inches each layer — and more carefully so that fossil resources can be identified and recovered," said Sotero.

Due to those conditions, Metro built an exploratory shaft to further study ground conditions and fossil recovery methods, and allow prospective contractors to review materials first hand, he added.

"Thanks to all that preparation work, a meticulous preliminary study of ground conditions and some additional geotechnical investigation work performed at the very beginning of the project, our team did not face any completely unexpected challenges," Sotero said.

Meanwhile, the $1.37 billion design/build contract for the extension's second phase was awarded Jan. 26 to Tutor Perini/O&G.

Phase II work calls for extending the line another 2.6 miles and adding stations at Wilshire/Rodeo in downtown Beverly Hills and in Century City. The budget for the second phase has been set at $2.4 billion.

Phase III involves extending the line to the Westwood/VA Hospital. Construction is expected to begin as early as 2019, according to Metro’s “The Source” blog.

Metro has committed to completing the entire subway extension by 2024, a summer Olympics year. Los Angeles leaders hope the International Olympics Committee will choose the city to host the games — and if that happens, the new subway would be helpful in transporting visitors between venues, Metro officials say.

Earlier this month, Budapest withdrew its bid from consideration, leaving only Los Angeles and Paris as host-city candidates.

The project’s subcontractors are: