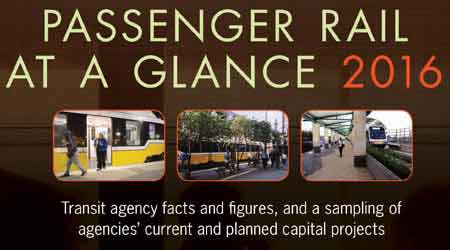 Meeting state-of-good-repair needs, completing capital repairs and expansions, and implementing positive train control (PTC) — all at the same time. That describes the balancing act that’s keeping transit agency leaders busy this year, according to survey responses the agencies sent to Progressive Railroading for the 2016 edition of “Passenger Rail At a Glance.”

Many of the high-priority topics cited on the 2016 surveys are holdovers from previous years’ surveys. One challenge that transit officials cited in past surveys that was missing this year: uncertainty over federal funding and PTC. Since last year’s “Passenger Rail At a Glance” was published, Congress passed the five-year Fixing America’s Surface Transportation (FAST) Act, and extended the deadline from 2015 to 2020 for railroads to install and launch their PTC systems. But the challenge of implementing PTC remains at the top of transit agency execs’ minds.

On the funding side, some agencies feel a bit more confident with the FAST Act in place, which provides federal funding for transportation programs through 2020. In addition, some states and/or local communities are helping transit agencies fill the funding gap. Several agencies this November are pursuing local ballot measures that would increase sales taxes or local fees to pay for transit expansion programs, while others cited increased funding from state coffers.

Finally, many agencies noted they’re continuing with major expansion plans that have been underway for some time. One gigantic project that’s been talked about for years moved forward late last month: the rehabilitation and expansion of Penn Station/Farley Post Office Building in Manhattan. New York Gov. Andrew Cuomo announced Sept. 27 that Related Cos., Vornado Realty LP and Skanska AB had been selected as the developer-builder team for the $1.6 billion project, which will develop Penn Station and the Farley building across the street into a 255,000-square-foot train hall for Amtrak and MTA Long Island Rail Road trains.

The project will create a transportation hub that also will feature larger concourses, retail and office space. Once completed, the new Penn Station/Farley Train Hall will be a world-class facility that surpasses Grand Central Terminal in size, according to Cuomo.

Although the Penn Station project was announced too late to be included in this year’s guide listings, it is a striking example of the flourishing interest in U.S. passenger-rail services.