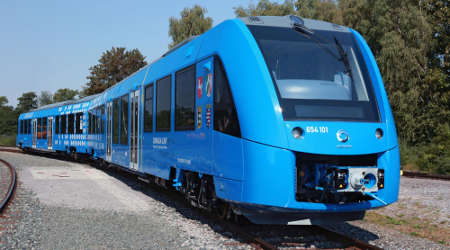 Even so, several manufacturers believe the global demand for passenger locomotives and multiple units will remain steady, and perhaps even grow.

"We're hopeful that the market will be buoyant in the future," said Siemens Rolling Stock President Michael Cahill. "There's a long pipeline of needs across the United States from various commuter railroads and transit systems, but how they get funding, of course, is the key question."

Funding concerns notwithstanding, other train builders characterize the overall passenger locomotive market as stable. And while they continue taking orders for their tried-and-true offerings, they're also piloting new technologies.

Over the past couple years, Siemens has been busy filling orders for its Charger locomotives. The company in March 2014 obtained a $225 million contract to build 32 of those units for departments of transportation in Illinois, California, Michigan, Washington and Missouri.

That order, which was coordinated by the Illinois Department of Transportation (IDOT) on behalf of the other states, included options for 225 additional locomotives. California, Illinois and Maryland in November 2015 opted to purchase 34 more Chargers.

Fourteen of those units were set aside for the Pacific Surfliner Amtrak route in California; the remaining locomotives were divided between IDOT and the Maryland Transit Administration. The locomotives, which can operate at speeds up to 125 mph, meet the U.S. Environmental Protection Agency's (EPA) Tier 4 emissions standards. The units also feature a 4,400 horsepower Cummins QSK95 diesel engine.

As part of a separate order, Siemens also is building locomotives for Brightline, All Aboard Florida's privately funded passenger-rail line between Miami and West Palm Beach, Fla. Those units have many of the same underlying features as the Chargers in the IDOT order, said Cahill.

"But there are some variations in the end product based on customer demands," he added.

For example, Brightline locomotives feature what Cahill described as Siemens' "high-speed train look" — that is, a closed front-end with a sleek nose to provide better aerodynamics.

In addition, there are some differences in the locomotives’ signaling systems. The units also have been designed to work with various positive train control (PTC) systems, Cahill said. 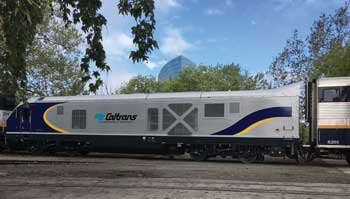 Siemens’ Charger locomotives can operate up to 125 mph.
Siemens

IDOT has ordered a total of 33 Chargers, which are slated to enter full-time service later this spring.

Outside of the Charger orders, Siemens is building 13 electric locomotives for the Southeastern Pennsylvania Transportation Authority. While the company hasn't had much activity in terms of new sales over the past six months or so, Siemens continues to work through a large backlog of projects, Cahill said.

Meanwhile, Alstom leaders maintain that the world market for multiple units is stable.

"Big projects will drive an increase in the short term," said Ulrich Gahl, market and portfolio director at Alstom.

The company is banking on new technological innovations to take advantage of that growth. At InnoTrans 2016, Alstom unveiled its iLint multiple unit, which the firm claims is the world's first train powered by a hydrogen fuel cell.

The trainmaker in March performed its first 50-mph test run of the iLint in Salzgitter, Germany. The testing was done to confirm the energy supply system's stability, according to a press release.

Alstom also tested the train's braking power to check the interaction between the pneumatic and electric brakes.

At the same time, Alstom continues to receive orders for its Coradia line of passenger trains. Since the start of the year, the company has signed contracts for the units with French rail operator SNCF Mobilites and Germany’s Deutsche Bahn (DB).

The company builds alternative versions of the Coradia model for different markets. The Coradia Nordic, for example, was built to withstand rigorous Scandinavian winters. That version is capable of operating at -35 degrees Celsius (-31 degrees Fahrenheit).

The Nordic also complies with northern Europe's gauge standard, according to Alstom.

The Coradia Meridian, on the other hand, was designed specifically for Italian rail operator Trenitalia and other regional operators in Italy.

Alstom also offers the Coradia Polyvalent, which the company describes as "one of the most versatile versions of the Coradia." The train is available in either an electric or diesel-electric version with three possible traction voltages.

"To answer different customer needs, Alstom has developed train platforms where different versions of a train with the same DNA can be provided, tailored to the different needs of each operator," Gahl said.

What are some general characteristics that customers seek in passenger locomotives? Efficiency, optimized capacity and competitive costs, Gahl said.

In October 2016, the company delivered its 100th Regio 2N train to France's SNCF. Based on Bombardier’s OMNEO electric multiple unit (EMU) platform, the Regio units were designed and produced in Crespin, France.

OMNEO models feature an energy management control system and are lighter than previous generations of double-deck EMUs, according to Bombardier.

As for new products, Bombardier has developed the TRAXX AC3 locomotive for passenger applications. In Germany, those units will be used to pull the company’s TWINDEXX double-deck rail cars on DB’s network.

Bombardier is supplying DB with 25 TRAXX AC3 locomotives and 124 TWINDEXX cars as part of an order announced in late March. The order was based on two framework agreements signed with DB in 2008 and 2013.

The TRAXX 3 locomotive also will be enhanced to travel at 200 kph, or about 125 mph, for cross-border service. 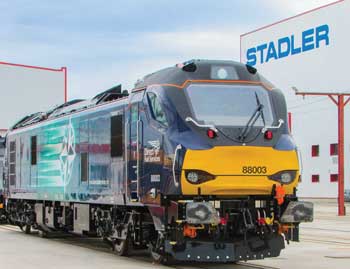 "Locomotive-hauled trains are attractive for cross-border traffic due to the low interoperability costs," Falke said.

EMUs with battery power also are becoming more attractive for rail operators, especially in Europe, Bombardier officials said. The company currently is developing the Talent 3 EMU for service on non- or partially-electrified routes.

While the overall passenger locomotive market in 2016 was "down worldwide," there was growth from 2012 through 2015 in several regions, including the United States and Russia, said Stadler Rail spokeswoman Mar Rivas. 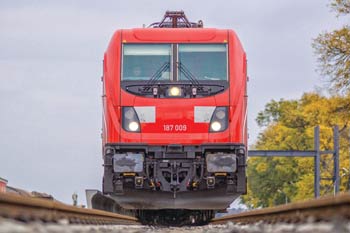 The "Fast Light Innovative Regional Train," or FLIRT, is another of Stadler's multiple units; to date, the company has sold more than 1,400 FLIRT units in 17 countries.

The list of FLIRT customers grew last year, when Stadler received an order from the United Kingdom’s Abellio East Anglia Ltd. for 20 electric and 38 bi-mode FLIRT units as part of a larger purchase.

Stadler also offers the Euro Dual locomotive, which operates on electrified and non-electrified lines. The unit travels at speeds up to 160 kph, or about 100 mph. The company has several diesel engine modules to meet customer requirements, Rivas said.

Similarly, Stadler's Class88 locomotive can run on electrified lines with overhead catenary but features a diesel engine to operate on non-electric lines.

In addition, the company has developed the EUROLight locomotive, which is a four-axle diesel-electric unit with AC/AC transmission and a low axle load, according to Rivas. The unit features high traction power and low weight. For passenger service in harsh environments, Stadler offers the four-axle EURO3000 locomotive.

More improvements on the way

The company is "constantly improving" the performance and efficiency of its trains, Rivas said. In developing new models, Stadler focuses on energy efficiency, low lifecycle costs and minimal maintenance needs.

"One of the things that is becoming more and more important to the engineers themselves is the space in which they operate," Siemens' Cahill said.

To that end, Siemens provides a dedicated air conditioning unit for the operator’s cab. And on the safety front, the company’s locomotives include multiple exit routes for engineers in the event of an overturn or derailment.

A call for rebuilds

"This may be a result of hesitation to update to Tier 4 emissions standards, required on all builds," he said.

The company now is working on two rebuild programs. One involves overhauling 10 F59PH locomotives for a passenger-rail customer in Canada. 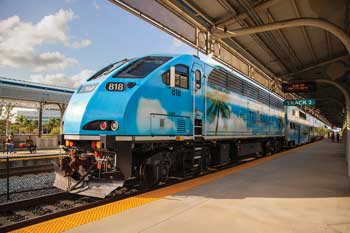 The other program calls for rebuilding seven GP35R utility and maintenance locomotives for MTA Metro-North Railroad. As part of that work, Brookville is completely tearing down the units and restoring their all-steel frames, engines, air brakes and trucks. The company is also integrating a new locomotive control system, which provides wireless diagnostics.

As of mid-April, four of the seven units have been returned to Metro-North, Mohney said. Brookville also sells its Eagle commuter locomotive, which meets the EPA’s Tier 4 emissions requirements. The unit can be either built to accept PTC equipment or shipped with PTC equipment installed at Brookville’s manufacturing facility.