My Amtrak Story: From Milwaukee to San Francisco 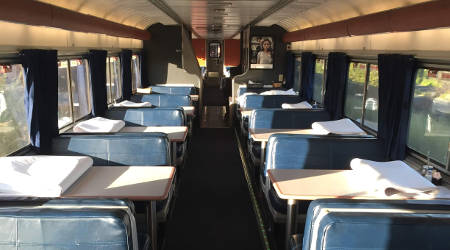 What made us decide to use Amtrak as our mode of transportation? Honestly, I don’t believe there was one specific thing that inspired us. My husband originally suggested the idea and said it was something he had wanted to do. So, I agreed to try it out on a one-way trip to San Francisco.

Neither of us had much experience riding trains. I had taken Amtrak’s Hiawatha route from Milwaukee to Chicago a couple of times for convenience, and my husband’s passenger-rail experience came only from European lines. Riding Amtrak for an extended period was going to be a first for both of us.

There are three routes that could get us out West, but ultimately we landed on the California Zephyr. Its final stopping point (Emeryville, California) was closest to our destination of San Francisco, and we were really looking forward to winding through the Rockies and seeing the snowcapped Sierra Nevadas. 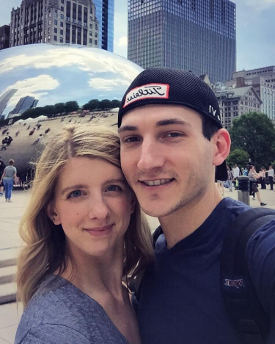 Gina and her husband Bill traveled from Chicago to San Francisco aboard the California Zephyr.
Photo – Gina Doyle

Next, we had to decide which accommodations to book. We chose a roomette, which consists of two seats on either side of a big picture window. For sleeping, the seats convert to the bottom bed and a top bunk folds down from the wall. According to the Amtrak website, the dimensions of a roomette are 3’6” x 6’6”. So, while it would be by far the smallest accommodations we ever elected to stay in, it really was all we needed for a couple days. A step up from a roomette is a bedroom where the toilet and shower facilities are included. This comes at a price that we were willing to forego. Instead, we used the shared facilities that are found in each sleeper car — three restrooms and one shower room.

A number of people asked if cost was a driver in choosing Amtrak. We were clearly not paying for convenience like you would a plane ticket, but rather for the experience overall. That said, our price of $928 for two train tickets cost more than airfare from Milwaukee to San Francisco. However, the train tickets also included meals and lodging — logistics we would have had to figure out if we had chosen to drive.

Our tickets bought us our roomette for lounging and two nights’ sleep, three meals a day in the dining car and access to a hot shower. Another item to note: Amtrak was extremely gracious in offering partial refunds on our ticket prices when we noticed — just a few days after booking — that the price had dropped. That’s something that can’t always easily be done with airline tickets.

Boarding the train in Chicago

Our route left on a Friday morning and, before we were even out our front door, we received a call from Amtrak stating the Zephyr train was delayed by roughly four hours. With that information, we still decided to go ahead and catch our scheduled route from Milwaukee to Chicago. Once we arrived at Union Station, we were able to take advantage of the lounge access, which was included in the price of our sleeper car tickets and proved to be a nice convenience.

The lounge provides drinks, snacks, chairs and TVs, plus we were able to store our luggage there. Access to the lounge — if you do not have a sleeper car reservation — costs $50. After dropping our bags off, we made the most of our time in Chicago. The delay gave us the opportunity to kill a few hours in a fun city, fill up on Giordano’s pizza and walk a good number of miles before our (mostly) sedentary trip ahead. 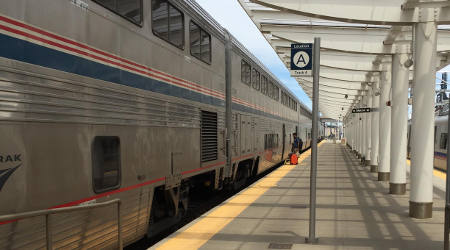 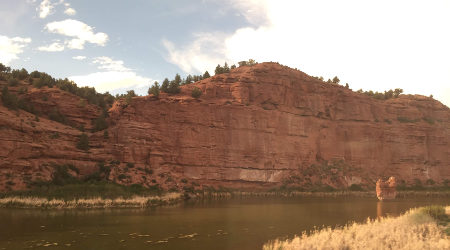 We boarded the train by finding our sleeping car and then our room number. Each sleeping car has an attendant who is available for most of the day, save for very late night or early morning. He or she can answer questions, provide clean towels, open the main door at stops for stretch breaks and make up and fold down the beds.

Our attendant, Cy, a Chicago native, stopped in and greeted us soon after boarding to give us the lowdown. Over the course of our trip, we enjoyed talking to him about the train and learned that he does two to four of the Zephyr trips a month.

Considering our delay, the dining car started dinner service soon after we left Union Station in Chicago. For dinner service, a dining car attendant comes around to each sleeping room and writes down your reservation. When it’s your turn, they call reservations over the public address system. My husband and I were not sure what to expect as far as food or service — or even where to find the dining car.

Chatting with other travelers

Once we found the right place, we were asked to sit on the same side of the booth and quickly learned that we would be sharing the table with other passengers, not unlike a cruise ship. Throughout our meals, we met a lot of friendly, interesting people. From our first co-diners — whose destination was Omaha, Nebraska, and had taken the route several times — to our last co-diners — people who didn’t speak much English — we conversed with a number of new people. 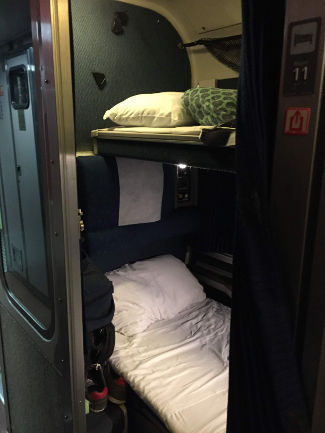 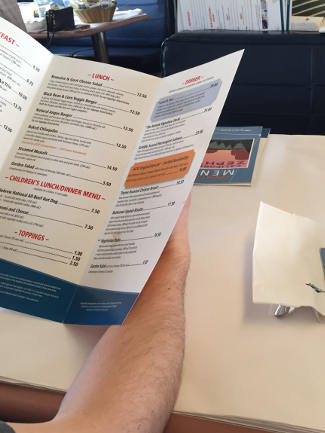 I was pleasantly surprised with the fact that, on two separate occasions, we were seated with passengers who lived outside the United States. It was interesting to learn where they were visiting from and why they decided to take an Amtrak trip.

As for the food, I found it tastier than I expected. I wish I had the opportunity to visit the kitchen facilities because I can only imagine the small scale the staff must have to work with while trying to feed a continuous stream of people. For dinner, you could choose from menu items such as salmon, chicken, risotto or even a signature steak. Lunch options consisted of a hamburger, veggie burger, or chilaquiles; breakfast consisted of scrambled eggs, pancakes, oatmeal or breakfast quesadilla options. Water and soda are also included with meals along with dessert, which we indulged in a few times. We highly recommend the pecan tart!

Initially, we were looking forward to spending time in the viewing car, which is located between the sleeping cars and coach. The top portion of the car has lounge seats with floor to ceiling windows, while the bottom part of the car has a few dining booths and a snack stand. This car was almost always at capacity. Coach passengers have access to this car, too, so the seats fill up quickly. We did have one or two opportunities to sit in the car, which provided nice views. But we mainly found ourselves in our personal sleeping car, using our large window to take in the scenery.

Our route took us through some spectacular places. The highlights were winding through scenery next to the Colorado River, taking in the views as we made our way up and through the Rockies and seeing the snowcapped Sierra Nevadas.

My husband and I agreed that our favorite stretch of the trip was between Denver and our final destination, which provided the best views — and would have been a great place to begin the trip if we didn’t have to get from Milwaukee to Denver.

A lot of our friends and family asked if we were able to get off the train during our trip. There’s a misconception that passengers can get off at every stop and explore. It would be fantastic if that were the case, but it also would add a huge amount of time to the journey. “Stretch breaks” came once every few stops — and we took full advantage to breathe in some fresh air and walk around outside for a few minutes. I believe Amtrak must plan these breaks based on the popularity of the stop and the number of people boarding and disembarking. 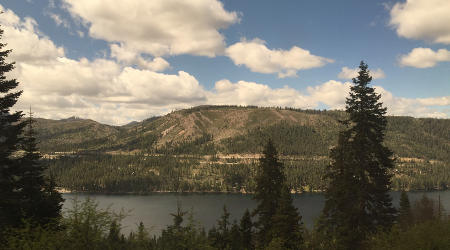 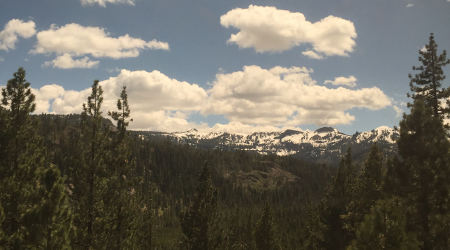 Shots of the Sierra Nevadas taken from the California Zephyr.
Photos – Gina Doyle

We also noticed that Denver was many passengers’ final stop. The train became noticeably quieter and less crowded from Denver on to California. All in all, we were two of only a few dozen passengers who rode the train all the way to Emeryville.

Overall, I had three main takeaways from our trip. First, you’re forced to slow down — but in a good way. There’s no hurry to get anywhere. Second, the change of scenery is constant. The views can’t be had by car or road. And third, you meet a lot of people, some who were veterans of these trips and others who found their way from Australia to the Amtrak route.

Since our return from San Francisco, the question my husband and I are often asked is: “Will you take another Amtrak trip?”

My answer is that we’re definitely open to considering another Amtrak journey. And the next one will be easier, because we’ll know what to expect. However, we’re also sure that when we take our next long-distance Amtrak ride, it will be a bit shorter on the distance. Fifty-one hours is a long time to be jostled back and forth while sitting or sleeping on a train.

In the end, we were incredibly happy to have had this experience. We highly recommend train travel if you’re looking for a unique trip or another way to see our beautiful country.