MARTA’s system hasn’t undergone a major expansion since it was founded 40 years ago. Meanwhile, the number of people in the metropolitan area climbed from nearly 5.3 million in 2010 to about 5.9 million 2018 — the fourth-highest population growth in the nation during that span, according to U.S. Census Bureau data. And the population boom the region is experiencing is expected to continue over the next three decades.

By 2050, the metro area is projected to be home to about 2.5 million more people, boosting the region’s population to 8.6 million, according to a forecast published by the Atlanta Regional Commission (ARC).

To accommodate the influx of more riders, MARTA plans to improve its 48-mile heavy-rail system, better integrate and expand the Atlanta Streetcar, and weave rail into the city’s transit ecosystem through station upgrades and transit-oriented developments (TODs).

While MARTA has teased rail expansion plans since the 2000s, little has advanced past the planning stages due to the lack of state funding. But with a push from General Manager and Chief Executive Officer Jeffrey Parker — who’s led MARTA since March 2018 — funding support from a local sales tax measure approved in 2016, and a draft timeline in place slating major project completion by 2040, the current plans are inching forward.

In 2016, Atlanta voters approved a half-cent sales tax that will generate about $3 billion in local funding for MARTA’s transit expansions over the next 20 years. That funding will be divided between both rail and bus system expansions.

The tax referendum opened the door for several projects. At the time, MARTA had more than $10 billion worth of transit projects on deck, Parker says. Since then, the agency has narrowed and prioritized the projects according to ridership needs, while remaining active in the federal funding process for future assistance.

“We’ve got to be competitive with federal funding to match the $3 billion worth of local funding that we have [in order] to maximize what we can build with this referendum,” Parker says.

Initial expansion plans call for 29 new miles of light-rail lines, which will represent 44 percent of the agency’s plan, while bus rapid transit (BRT) and arterial rapid transit (ART) projects will make up the rest.

Some of those projects will need to be 35 percent to 50 percent federally funded, while other smaller ones could be completed solely with local funding, Parker says.

“We see this as a little over a $5 billion program through federal and private funds,” he says.

Much of those dollars would be used to acquire land or develop existing parcels during construction within the transit corridors the agency has defined.

MARTA has defined the priority transit corridors and modes of transportation, and now is working to determine what types of transit options riders would need the most in those corridors, Parker says.

One of the biggest priorities to allocate funding for is the Atlanta BeltLine project, which calls for operating light-rail lines along 22 miles of abandoned rail right-of-way that loops around Atlanta’s inner core. The BeltLine is being transformed into a mixed-used trail, and the city of Atlanta plans to develop it to connect the city’s neighborhoods. MARTA is on board with the city’s vision.

Early concepts propose connecting light rail, MARTA’s existing heavy-rail system and BRT corridors throughout the BeltLine. The light-rail projects on the BeltLine will be completed in segments.

By 2025, MARTA expects to enter the design phase for the BeltLine’s 3.5-mile southwest segment between Oakland City Station and Westview Drive near Interstate 20, and a 3.5-mile northeast segment between Ponce City Market and Lindbergh Center Station.

Future segments also could connect Atlanta’s east and west sides, as well as the southwest segment with a western extension of the Atlanta Streetcar and the existing Bankhead heavy-rail station.

In addition, MARTA aims to extend the Atlanta Streetcar east 2 miles between Poncey-Highland, Old Fourth Ward and Inman Park in the BeltLine corridor, and then eventually west 3 miles between southwest Atlanta and downtown. Construction on the eastern extension is projected to begin in 2025.

The overall concept for Atlanta transit is to integrate the streetcar into an extensive light-rail network on the BeltLine, which will connect the Campbellton Road and Clifton Road corridors, Parker says.

Another project pegged for 2025: bringing Bankhead Station up to system standards by extending its two-car platform to accommodate eight-car trains to match other stations.

Other BRT and ART projects designed to improve connections to the West End, East Point, Brookhaven, Arts Center and North Avenue rail stations also are slated to be finished by 2025.

“We are evaluating the feasibility of a phased approach to implement amenities [that] would improve the customer experience more immediately, while still meeting the sequencing plan commitments,” said MARTA Communications Manager Stephany Fisher in an email.

In with the old

Although system expansion is top of mind, MARTA’s existing rail stations, infrastructure and fleet also are in need of attention. Some 40-year-old stations have never undergone major improvements, so the agency plans to spend $10 million to $15 million per station to rehabilitate them, Parker says. 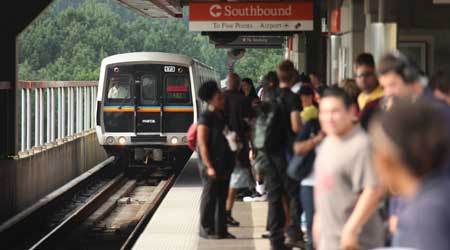 Five Points Station is the busiest in the MARTA rail system. It served 15,302 weekday riders in fiscal-year 2019.
MARTA

For example, Five Points Station eventually will undergo a complete interior and exterior rehabilitation. As the cross-point of two rail lines, the site of three major TODs and MARTA’s busiest station, Five Points is high on the list for an upgrade.

“These are huge, huge developments,” Parker says of the TODs adjacent to the station. “And in addition to that, Georgia State University, which serves and intersects a lot with Five Points Station, is growing as a university. So, we just have a lot going on there, and we want to make sure that what we do at the street level matches what the city sees as an investment.”

It’s also vital to incorporate micromodes of transit — such as electric bikes and scooters, and rideshare options — into rail station designs so that all transportation modes fit together seamlessly in a transit ecosystem, he says.

In the spirit of creating a transit ecosystem, MARTA also is seeking to attract TODs around its stations. Last month, the agency began soliciting developments at five stations within federal opportunity zones, including West End, Lakewood, Vine City, Ashby and Hamilton E. Holmes.

“We’ve set a goal internally, and with the city, of hopefully getting 600 affordable housing units at these stations,” Parker says.

MARTA has been investing in heavy-rail system improvements, too. The network, which opened in 1979, is gaining signal system upgrades.

The agency is nearing completion of a $116 million upgrade to its train control system helmed by Alstom Signaling Inc., and a supervisory control and data acquisition system provided by Kapsch USA.

The next major investment related to the automatic train-control system is the replacement of more than 11,000 electro-mechanical vital relays with new state-of-the-art devices. The multimillion-dollar effort is in the early planning phase. MARTA officials plan to study available technologies this year, with specification development starting in 2021.

The agency’s rail fleet is pegged for upgrades, as well. By 2022, MARTA expects to take delivery of its first new pilot rail cars from Stadler Rail.

The procurement is the single largest for both MARTA and Stadler, agency officials said in a press release.

The new cars will reduce the number of unscheduled repairs associated with the existing 30- to 40-year-old fleet, Parker said in the press release.

“About 65 percent of our delays are due to rail-car reliability, and with rail transit being the cornerstone of our business, we aim to change that,” Parker said.

Whether expanding rail, improving stations or investing in cars, MARTA is pursuing a vision for the future of transit in Atlanta and the funding necessary to achieve it. 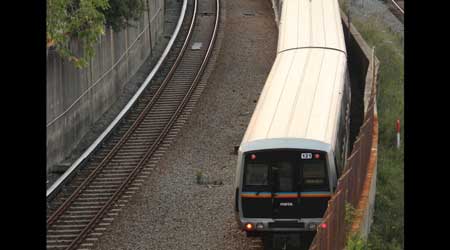 Atlanta voters approved a half-cent sales tax that will generate about $3 billion in local funding for MARTA’s transit expansions over the next 20 years.
MARTA

As more people migrate to the metro area, the agency has a goal to improve transit services in historically underserved communities by increasing access to employment centers.

MARTA has an opportunity to invest in transit through referendums — and there will be more to come, Parker believes.

With Atlanta’s population growing incredibly fast, transit development will have a profound effect on the ability for people to be able to afford where they live and work, he says.

“We see that our mission is not only just improving transit, but making sure that we’re helping and dealing with connecting affordable housing to jobs,” Parker says.

For example, the Clifton light-rail corridor priority project doesn’t go through an area that’s economically depressed, but rather an area that offers a lot of employment and is separated from the transit and highway system.

Connecting rail to an area with many job opportunities enables people living in affordable housing to connect more quickly and efficiently to quality jobs, Parker says.

For Parker, the MARTA expansion is all about finding balance in the agency’s investments over the next 40 years to best serve riders.

“We’ve made very conscious and delivered decisions to make sure that we’re prioritizing and investing in an equitable way across our system,” he says.