Atlanta residents increasingly are taking to the streets on bicycles — so much so that city leaders have set a goal to make Atlanta one of the nation's Top 10 most "bike-friendly" cities by 2016. As part of the effort, the Metropolitan Atlanta Rapid Transit Authority (MARTA) is doing what it can to make it easier for cycling enthusiasts to take their bikes with them when they use the public transit system.

One example: Last month, the agency turned to a crowd-sourcing platform to raise more than $4,000 to help fund three bike-repair kiosks that will be installed at MARTA rail stations.

The kiosks will contain the equipment necessary to make basic repairs such as fixing a flat tire or adjusting loose handlebars, says Saba Long, a MARTA spokeswoman. 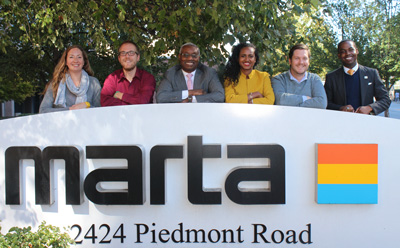 "Cycling is becoming quite popular in our service area and around Georgia in general," she says. "MARTA is making it convenient to bring your bike on the MARTA system and, with this project, fix it at the station if you need to."

The kiosk idea came from agency staffers who were brainstorming ways to attract more Atlanta cyclists to use public transit. Their conversation was and is part of a broader discussion underway in Atlanta about how to reduce the auto vehicle traffic congestion that the metro region is famous for. Tapping into the millennial generation's strong interest in cycling is one way to help do that, MARTA officials say.

"Lots of millennials who are coming into Atlanta and moving to in-town neighborhoods are looking for options other than driving," says MARTA spokesman Lyle Harris. "So, bicycling and transit go hand-in-glove."

To find the dollars for the kiosk project, MARTA staff decided to test the concept of crowd-funding, the practice of funding a project or venture by raising small amounts of money from lots of people via the Internet.

To get its venture started, MARTA turned to IOBY, a nonprofit organization that offers what its website describes as a "crowd-resourcing" platform for citizen-led projects aimed at improving local neighborhoods. In addition to raising funds, the organization helps pull together other resources necessary to make improvements.

IOBY stands for "In Our Back Yard" and is designed to dispel the "NIMBY" — not in my backyard — attitude toward community projects such as public transportation, Long says.

Earlier this fall, IOBY and the nonprofit TransitCenter in New York City launched "Trick Out My Trip," a program that provides up to $4,000 in matching funds for small neighborhood projects intended to make public transit easier, safer and more fun to use. Project examples include mini libraries at bus stops and community gardens at train stations.

"For the most part, investment in transit comes in billions of dollars," IOBY Executive Director Erin Barnes explained in a recent edition of Next City blog. "Our focus has always been on small projects. We want to see solutions led by riders and people who actually use the services, rather than municipalities."

MARTA's first attempt at crowd-funding was a challenge in part because the window to raise the money was so short: It launched Oct. 21 and wrapped up Oct. 23, Long says. Still, the agency not only met its fund-raising goal of $4,000, it exceeded it. The final sum raised was $4,542, which qualified the project to receive $4,000 in matching dollars from the TransitCenter. Donors to MARTA's fundraiser included the agency's board members and executive-level staff.

Now MARTA's facilities team is working with the Atlanta Bicycle Coalition — a nonprofit organization that supports safe cycling as a mode of transportation — to determine the best kiosk product to buy and, once purchased, where the kiosks should be installed.

"At this time, we're considering two rail stations and one bus shelter. Ideally, the kiosks will be near existing or planned high-capacity bicycle facilities, such as a two-way cycle track located near our Midtown station and the Atlanta BeltLine," says Long.

Now that MARTA has tasted success in its first attempt at crowd-funding, the agency might consider it for future projects such as raising community support for art installations at MARTA stations. In a broader sense, the crowd-funding concept fits nicely with MARTA General Manager and Chief Executive Officer Keith Parker's desire to promote a stronger sense of community ownership of Atlanta's transit system, says Harris.

"We believe in the wisdom of the crowd," he adds.