Since it was completed in December 2012, the 584-linear-foot Gold Line Bridge that extends diagonally over the I-210 Freeway's eastbound lanes in Arcadia, Calif., has been attracting plenty of attention.

Designed by internationally known artist Andrew Leicester, the Gold Line Bridge is the largest public-art infrastructure project in California to date. It also represents the first completed element of the 11.5-mile Metro Gold Line Foothill Extension project to expand the light-rail line from Pasadena to Asuza.

The bridge's most prominent features are the two, 25-foot concrete basket sculptures that anchor the structure, and the distinctive snakeskin-like markings that run along the bottom of the bridge span. Leicester used the basket theme to pay homage to the San Gabriel Valley’s cultural heritage; the snakeskin-like grooves were cast into the concrete to simulate patterns found on the western diamondback rattlesnake.

Metro Gold Line Foothill Extension Construction Authority officials knew early on that they wanted the bridge to do more than provide a pathway for light-rail trains to pass over I-210. They also wanted a work of art that would serve as a gateway to the San Gabriel Valley.

"We had the idea of turning the bridge into a sculpture," says Habib Balian, the construction authority's chief executive officer. "We didn’t want what I call 'plant-on art,' where an artist creates something to stick on the wall. We wanted the art to be in the form of design. The baskets that you now see from the end caps of the bridge — those are part of the structure that's holding up the bridge." 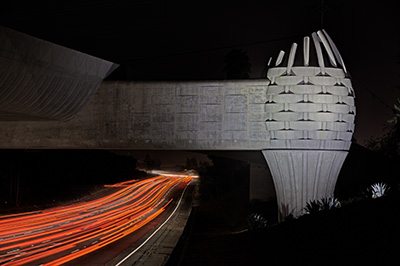 Metro Gold Line Foothill Construction Authority
Leicester was chosen as the project's artist because "he got it, he was able to wrap his mind around the concept," Balian says. An England native who now calls Minneapolis home, Leicester has been creating public art projects in the United States, United Kingdom and Australia for more than 30 years.

"To me, public art is encountered in everyday life and, as a result, has a huge audience without requiring the viewer to go to a specific space to see it," Leicester said in an interview posted on the construction authority's website. "Unwittingly, people experience art in an environment over-saturated with other visual stimuli."

He said his inspiration for the Gold Line Bridge was drawn from the region's cultural history and architecture.

"The large baskets that adorn the bridge metaphorically represent the Native Americans of the region and the growth of agriculture as a primary catalyst to the San Gabriel Valley," Leicester said. They also pay tribute to icons along Route 66, with its oversized commercial architecture such as the windmill on top of a Denny's restaurant on Huntington Drive in Arcadia, he added.

Also unique to the project was the early point at which Leicester was brought on board, says Balian. The artist worked alongside the project's design-builder Skanska USA and design consultant AECOM to make sure the end product was consistent with what the construction authority intended.

The project has been recognized for the structure's artistic beauty, as well as for the team's ability to overcome design, engineering and construction management challenges involved in building a bridge over an earthquake fault and busy freeway system. The $18.6 million project was completed on budget, too.

Recent accolades include "Best Project in Southern California, Highways and Bridges," by the Engineering News-Record; the 2013 "Engineering Achievement Award" by the American Council of Engineering Companies; the 2013 "Project Achievement Award" by the Construction Management Association of America; the "Distinguished Project Award," by the Western Council of Construction Consumers; and the "Outstanding Public Civil Engineering Project, Transportation Over $10 Million" by the American Society of Civil Engineers.

The bridge also has been well received by the public, Balian says.

"Not only did we produce a design that people gravitate to, we did a good job in executing the project," he says. "It looks great, and it got rave reviews from the community and elected officials who like the uniqueness of it. It's a new landmark for San Gabriel Valley."