Ever since train-hopping bluesman Robert Johnson sold his soul to the devil at a crossroads in rural Mississippi (or so legend has it), blues music and railroads have had a mythical connection. Steve Gumble, founder, owner and director of Colorado’s Telluride Blues & Brews Festival and Snowmass Mammoth Fest, fuels that fascination with the Durango Blues Train. 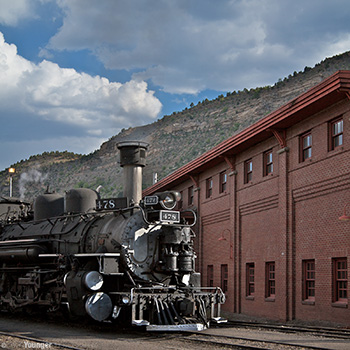 For the third consecutive summer, Gumble will rent and temporarily rename the popular tourist train pulled by a coal-fired, steam-powered locomotive operated year-round by the Durango & Silverton Narrow Gauge Railroad (DSNGR) in southwestern Colorado. The line was constructed in 1882 to haul silver and gold ore from the San Juan Mountains, but it wasn’t long before the train began transporting passengers, too. It’s been in continuous operation for more than 130 years.

“Trains are such a big part of our country’s history,” Gumble says. “And this is the perfect combination. The rhythm of the train, that clack-clack, keeps a blues beat. The train is the percussion.”

The Durango Blues Train makes some noise only four nights a year — May 30-31 and Aug. 22-23 — departing from the Durango Depot with 11 cars carrying one electric blues band in each of two mostly seat-free gondolas, acoustic solo artists in each of four coach cars and passengers who are free to roam from car to car to sample performances from all six artists.

“It’s like a party in somebody’s living room, and I’m making the music,” says Albuquerque, N.M.-based singer/guitarist Alex Maryol, who performed on the inaugural Durango Blues Train in 2012 and will return on Aug. 23.

The train journeys 90 minutes north of Durango through the stunningly scenic caverns of the Colorado San Juan National Forest to a steep elevation known as “The Highline” shelf, which overlooks the Animas River. The musicians take a set break as passengers arrive just as the sun sets, providing the trip’s most breathtaking views.

At that point, performers and fans exit the train while the locomotive engineer (a DSNGR employee) turns the train around via wye switch. Everyone re-boards, and the Durango Blues Train heads back to the depot. All told, the trip takes three-and-a-half hours.

Onboard, the festive scene is unlike any blues fans can experience in a bar or club.

“You might get hit in the head with the neck of a guitar,” Gumble says, referring to passengers on the move. And he’s serious. “We ask that you don’t knock over an artist when you walk past.” 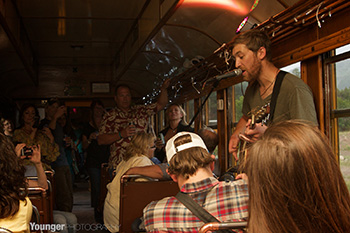 "It's like a party in somebody's living room, and I'm making the music," says singer/guitarist Alex Maryol.
Kevin Younger Photography

Kirk James, a local bluesman who in August will perform for the fourth time on the Durango Blues Train, can vouch for the veracity of Gumble’s comment.

“Whether at the beginning of the night or the end of the night, no matter if they have been drinking or not, everyone on the train walks the same,” he says. “People shuffle as they make their way from car to car. I try to time my vocal phrases to avoid them nudging the microphone and hitting me in the teeth.”

Artists make other adjustments to their sets, too.

“We adapt our performance to such an intimate setting by packin’ ‘em in and givin’ it to ‘em loud and fast — just like the roar of the train,” says Meridith Moore, vocalist for Durango Blues Train veterans The Sugar Thieves, a Phoenix band that performed on the train last year and will occupy one of the two gondolas on May 30. “On our car, we have a five-piece electric band, all standing, loud and upbeat. It’s the party car.”

Maryol says his acoustic set consists entirely of blues numbers, even though he has plenty of non-blues songs in his repertoire.

“The uniqueness of the gig calls for something different from any other gig,” he says. “Plus, I’m a sucker for Colorado scenery. For me to be performing on a train like that, riding through the country, is such a highlight.”

Indeed, all of the artists interviewed have previously performed onboard the train and consider being invited an honor.

“The Durango Blues Train is the most unique and incredible festival setting I’ve played,” James says. “The only frustrating aspect for a musician is that all of us start and stop playing at the same time. So, none of us get to hear the other blues acts perform.”

Gumble hasn’t hit on a completely original idea. In Queenscliff, Victoria, Australia, The Blues Train runs (usually powered by a steam locomotive) on Saturday nights from August to May along the historic Bellarine Railway, and the Alaska Railroad operates a blues train one weekend a year.

“Taking a blues element and putting it into another element on the train was the easy part,” Gumble says, adding that convincing the railroad his idea was worthwhile and feasible proved more challenging. “To go into the maintenance shop and say, ‘We want to pull out all of these seats’ — they just didn’t understand.”

Eventually, officials with the DSNGR agreed to partner with Gumble and are heavily involved in the preparation and operations of the Durango Blues Train.

Still, the gravity of what he was doing — temporarily dismantling a piece of American history in the name of American music — hit Gumble like, well, a high-speed locomotive.

“The first time I walked into the yard and saw the train, my jaw just dropped,” he says. “I was like, ‘I just rented this thing?’”

Rail and blues fans now arrive from all over the country to hop the Durango Blues Train, which costs $95 per person per night (the musical lineup differs each time). But most of the passengers still come from Colorado and bordering states such as Arizona, New Mexico and Utah.

“It’s rekindled an interest in the Durango train for many in the region, and people who come on the Blues Train say they haven’t ridden the train in 20 years,” Gumble says, adding that it is still a “tiny, tiny component” of the DSNGR and operates on a “very limited budget,” making it difficult to bring better-known artists onboard.