Even in tough times, rail transit agencies realize the benefits of public art

An often-mentioned benefit of riding public transit is that it allows commuters to squeeze in more work time via their smartphones and laptops while someone else does the driving.

But there’s another benefit to taking the train or subway to work: the opportunity to view dozens of original works of art displayed along the routes. 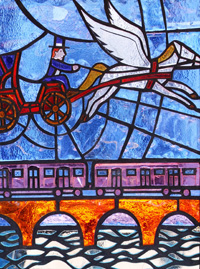 Many of the nation’s transit systems have impressive collections of murals, photographs, mosaics and sculpture in and around stations, terminals and bridges, as well as inside some trains, buses and subway cars. Now, one of those agencies — the Metropolitan Transportation Authority (MTA) in New York City — is making it even easier for riders to appreciate original works of art.

In March, MTA — which unveiled its “Arts for Transit” program in 1985 as part of a broad effort to clean up New York City’s subways — launched an officially licensed mobile “app” to give transit riders detailed information about the MTA art collection.

The application for Apple and Android mobile devices allows users to download and browse through 236 contemporary pieces of art found throughout New York City Transit, Long Island Rail Road, Metro-North Railroad and MTA bridges and tunnels. The app was built by Meridian Inc., a software firm that specializes in creating mobile technology applications for museums.

As of early April, about 5,000 people had added the MTA art app, which organizes the MTA-commissioned artwork by subway, rail line and artist, says Sandra Bloodworth, director of MTA Arts for Transit and Urban Design.

“We have this massive collection of artwork that you can now carry in your pocket,” Bloodworth says.

The app’s introduction follows the MTA’s recent re-launch of “Poetry in Motion,” a project in which MTA pairs photos of artwork with poetry excerpts and posts them in subway cars, at major transportation hubs and on the back of select MetroCards. Poetry in Motion had been put on hiatus in recent years, but was updated with artwork and reintroduced in response to customer demand.

“It’s a way for individuals to have a moment of reflection or contemplation and connect in this very public place,” says Bloodworth.

Through Poetry in Motion, social media sites like Facebook and Tumblr, and organized art tours, Bloodworth and other MTA officials are trying to raise public awareness of MTA’s collection, which features works by well-known artists and the up-and-comers.

MTA is one of several major U.S. transit agencies that commission public works of art for display when building new rail or subway systems and transit stations.

The inclusion of art and design excellence in transit facilities is one of the most effective ways to create a positive experience for the customer, which in turn encourages more people to ride transit, Bloodworth says.

In today’s tight economy, people in some communities question the need for spending public resources on art for a train station, Bloodworth acknowledges. But from her perspective, commissioning artists and designers to create original work for transit facilities provides a valuable return on investment.

“If you look at certain things that we cherish across time — such as Grand Central Terminal in New York or the London Underground or the San Francisco cable car — they were designed very well,” she says. “They evoke design excellence, and when we pursue design excellence, we see the product lasts.”

MTA budgets for public art as part of its capital program. One percent of a station rehabilitation or new construction project’s budget goes toward the creation of a new piece of art for that station. Many other agencies have similar setups, and the Federal Transit Administration encourages public art investments in transit projects built with federal dollars.

For instance, the Ramsey (Minn.) County Regional Railroad Authority (RCRRA) plans to invest $1.25 million in four public works of art as part of the $243 million renovation of the historic Union Depot in St. Paul, Minn. About 80 percent of the four art projects will be covered by FTA funding, RCRRA officials said in a prepared statement issued April 9, when the agency announced a call for artists to apply for consideration.

And in California, the Los Angeles County Metropolitan Transportation Authority (LACMTA) commissioned 10 artists to create original works for 10 new stations along the first phase of the Metro Expo, an 8.6-mile line scheduled to open on April 28. The artwork features a series of panels that will be installed above stations’ entryways and seating areas to display a visual narrative of rail travel through neighborhoods along the line.

"We've presented the artwork like an outdoor gallery display, with art scrolling horizontally along the entire length of the platform to maximize visibility,” said Jorge Pardo, deputy of art and design for LACMTA’s Metro Creative Services, in an April 18 prepared statement.

Many agencies also offer a virtual tour of their collections on their websites. Below are links to several agencies’ collections.