A streetcar they desired

These days, major U.S. cities are jumping on the streetcar bandwagon, building systems through downtown areas as a means to provide urban transportation and, perhaps just as important, stimulate economic development. 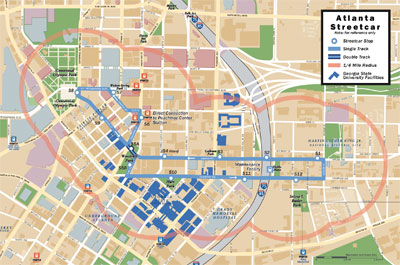 In early February, the city of Atlanta kicked off construction on a 2.6-mile streetcar line that will serve as an east-west circulator connecting what’s known as the Old Fourth Ward — a Martin Luther King Jr. historic zone — with Centennial Park.

Atlanta’s streetcar plans date back to the 1990s, when several proposals were submitted to the city council. In the early 2000s, Atlanta business leaders reignited the talk after visiting Portland, Ore., and other cities that had recently opened streetcar lines. A mayor-appointed task force then developed a proposed route, which included a long segment connecting Buckhead on Atlanta’s upper side to the south side, as well as a shorter east-west route.

The business community originally proposed funding the streetcar using a mix of local and private funds, but when the Obama Administration launched federal funding programs that streetcar projects could be eligible for, Atlanta officials decided to apply — and the Metropolitan Atlanta Rapid Transit Authority (MARTA) got involved.

Because it has experience applying for federal transit funding and numerous industry contacts, the agency was able to help the city with its application, says MARTA’s Manager of Streetcar Development Paul Grether. In 2009, the city — in partnership with MARTA, the Downtown Improvement District and Midtown Improvement District — submitted an application for a Transportation Investment Generating Economic Recovery I (TIGER I) application for the entire streetcar project. The requested amount? Three hundred million dollars — the most an applicant could seek.

“That request was politely declined, but it helped get us organized and helped kick off the NEPA [National Environmental Policy Act] process, and it set us up for when TIGER II came up,” says Grether. “That time around, we just focused on the east-west circulator and asked for a much smaller amount, and we had some local funding to put on the table, and we were successful — we got the largest TIGER II grant in the country.”

The $47 million grant, combined with $15.6 million from the city and $6 million from the Downtown Improvement District, will fund the streetcar’s $69 million starter line. The city is contributing another $9.4 million to purchase new streetcars; the project originally called for purchasing used vehicles and rehabilitating them.

“We decided that this is a first stake in the ground in the Atlanta region for streetcar and light rail, so we wanted it to be a modern project,” says Grether. “Since vehicles are really the centerpiece of any streetcar project, we decided to get new ones.”

The city piggy-backed on an order the Utah Transit Authority had placed with Siemens for S70 light-rail vehicles; Atlanta is buying four of the vehicles and Siemens is modifying them to operate on a streetcar platform, says Grether.

MARTA has awarded a design/build contract to URS Corp. Preliminary construction is expected to begin in the next two months, and the 12-station line is scheduled to open in third-quarter 2013, says Grether. Once it does, MARTA will operate the streetcars under an agreement with the city.

“From a customer’s perspective, the system will be completely integrated with the existing transit system, so you’ll have transfer privileges. If you have a MARTA pass, you can ride the streetcar,” says Grether.

Atlanta-area transportation planners don’t expect the east-west circulator to be the sole streetcar service for long. The city has rolled out a transportation plan that includes a network of streetcar and light-rail lines. In July, voters in the 10-county region will determine whether to approve a one-cent sales tax measure to fund the various projects.