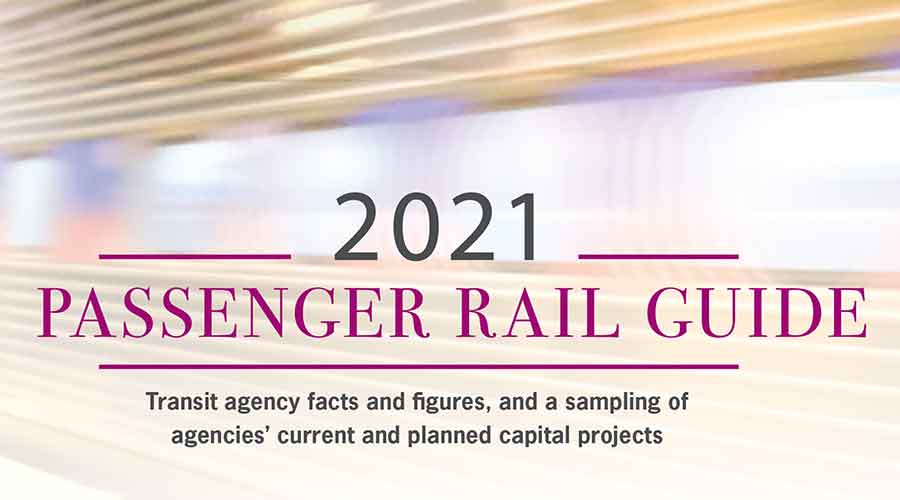 Welcome to the 2021 Passenger Rail Guide, which features a sampling of the many agencies that operate passenger-rail service in major U.S. and Canadian cities. The information in this year’s guide comes from responses to a Progressive Railroading survey.

Without question, the stress and strain that most agencies have been operating under since the COVID-19 virus was declared a pandemic in March 2020 has continued through 2021. After a drastic falloff last year following government-ordered shutdowns, transit-rail ridership is returning slowly, especially as many commuters and riders have yet to return to offices and worksites. What that trend might mean over the long term is uncertain.

For example, ridership on Metrolinx GO Transit, which serves the greater Toronto area, plummeted to 90% of pre-pandemic levels.

“We anticipate full recovery will take a few years and may look somewhat different as many office workers adopt a hybrid working model, staggered work hours beyond the traditional 9-to-5 model, and  put a greater emphasis on connecting with family and friends,” officials at Metrolinx, the parent agency of GO Transit and UP Express, stated in their survey.

Although a hit to fare revenue, reduced train schedules over the past 19 months have enabled some agencies to speed up timelines for conducting maintenance-of-way and other capital work.

Meanwhile, agencies continue to take numerous steps to safeguard passengers so that they feel confident riding trains. Chicago commuter railroad Metra, for instance, has implemented new disinfecting and deep-cleaning practices, installed hospital-grade filters to capture airborne particles on trains; offered a “touchless” fare payment app; created a “ridership dashboard” to indicate how crowded trains are and added extra trains as needed so that riders can maintain physical distance from each other.

It’s remained unclear throughout 2021 when the pandemic will finally end. What is clear is that COVID-19 has had an unprecedented impact on the passenger-rail industry. What’s to come for the industry heading into 2022? Stay tuned.

Formed in 1975 to provide public transportation services to Cuyahoga County in northeast Ohio, the agency’s services include light and heavy rail, bus and paratransit modes. 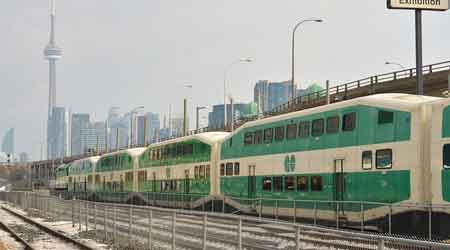 A GO Train arrives at the Exhibition Station in Toronto.
PhotographerIncognito / Shutterstock.com

Metrolinx is an agency of the Ontario government, established under the Metrolinx Act of 2006. The act mandates Metrolinx to coordinate, plan, finance, develop and implement an integrated transit network in the Greater Golden Horseshoe. Metrolinx is responsible for the operation of the regional transit system.

Ridership (as of 2021): Since March 2020, as the pandemic hit, transit ridership plummeted and for most months was below 90% of pre-pandemic levels. Weekend ridership is returning the fastest. At times, the agency is registering ridership at 40% to 50% of pre-pandemic levels, as riders take trips to see family and friends or visit tourist attractions around the province, and attend sporting events. GO Transit trains and buses are beginning to see increased ridership, which is why the agency has returned most service and added some new options. The most recent data shows an average morning peak ridership of 12.6%, and an overall weekday ridership average of 16.6%. With the return of airline flights, UP Express ridership is currently at 20% above pre-pandemic levels.

• GO Expansion On-corridor Works, in procurement. Cost: CA$15.7 billion. The project consists of the core infrastructure and services that will allow Metrolinx’s rail corridor to run two-day, all-day service at a frequency of every 15 minutes, throughout the Greater Toronto and Hamilton Area network.

There are over 50 individual projects included in the early works program, including several smaller projects delivered as design-build or design-bid-build, along with eight larger projects delivered as build-finance and design-build-finance. The latter includes the Davenport Diamond Rail grade separation project; the Highway 401 Rail Tunnel, which was substantially completed in August 2021; and the Stouffville Corridor Stations improvement project. The program also includes infrastructure renewal at Union Station, including construction of a new South Concourse, track expansion east of the station and replacement of the 90-year-old signaling system with new state-of-the-art signals, communications, power supply, CCTV and SCADA systems.

• GO Expansion-Off Corridor. Cost: CA$619 million. These projects for the GO Expansion are the smallest of the three sections of the expansion project.

MARTA provides 95% of the public transit trips in the metro Atlanta region with 110 fixed bus routes, 38 heavy rail stations, 2.7 miles of light rail, and on-demand paratransit services. MARTA is primarily funded by a 1% sales tax in Fulton, DeKalb and Clayton counties, and a 1.5% sales tax in the city of Atlanta.

• Traction power substation (TPSS) replacement program. The project will start in spring 2022 and involve replacing aging end-of-life TPSS equipment. Timing and sequencing will be determined by available budget and prioritization of need. Total cost: $27 million to $32 million. Preparing procurement of Wave I.

• CQ400 new rail cars, which is underway. MARTA entered a contract to purchase 254 rail cars from Stadler US in November 2019 for $646 million. The contract includes an option for MARTA to purchase an additional 100 rail cars. The first new rail car is scheduled to arrive in 2023.

• $4 billion in projects underway or entering procurement since 2018, a 65-times increase from $60 million in hard-money contracts in 2017.

• In February 2019, Metra’s board approved a $70.9 million contract to purchase 15 remanufactured EMD SD70MAC freight locomotives to begin to replace Metra’s aging fleet. The contract with Progress Rail Locomotives includes options to buy up to 27 additional locomotives, if funding is available.

• In January 2021, Metra’s board approved the purchase of up to 500 state-of-the-art rail cars from Alstom Transportation Inc., opting for new multilevel cars. The initial order will be for 200 cars. Metra will have the option to buy up to 300 additional cars for up to $1.8 billion total.

• In February 2021, Metra’s board approved the issuance of a request for proposal (RFP) for the purchase of seven new low-emission switch locomotives, including the railroad’s first zero-emission electric-powered unit. The other six units will be required to meet EPA Tier IV emission standard. Results of the RFP have yet to be announced.

• Auburn Park Station and EW-2 bridge lift: Construct a new station in the Auburn Park neighborhood on Metra’s Rock Island Line. A $28.2 million contract has been awarded to John Burns Construction to build the station and a parking facility.

• Peterson Ridge Station: Construct a new station on the Union Pacific North Line at Peterson and Ridge avenues. A $15.2 million contract was awarded to John Burns Construction to build the station and a parking facility.

• A-32 Bridge and Grayland Station: Replace a railroad bridge over Milwaukee Avenue on Chicago’s northwest side that was built in 1899. The new double-track bridge will have a ballasted deck, requiring that the tracks and platforms at the adjacent Grayland Station be raised. The work at Grayland Station will also include a new passenger shelter, ramps and stairs. In addition, the bridges over Addison Street and Irving Park Road will be repaired. A $27 million contract was awarded to IHC Construction Companies LLC. The project is being funded with a combination of federal formula funds and a $17.8-million federal grant.

• 147th Street/Sibley Boulevard Station: Replacement of the platform, head house and construction of a drop-off on the west side of the station on Metra’s Electric Line. Final costs TBD. Project went out to bid in the summer 2021 and is expected to be awarded by yearend.

• Vermont Street Station: Renovation of the historic on the Rock Island Line in Blue Island, Illinois. Structure dates to 1868. Final costs TBD. Project went out to bid in the summer 2021 and is expected to be awarded by yearend.

• Westmont Station: Replace platforms and add new technology to this station on the BNSF Line. The project will include repairs to stairs and improvements to the station’s ADA features. The 2021 capital program allocated $2 million in federal state-of-good repairs funds to the project. Final costs TBD.

• 95th Street Station: Build a new station and parking facility on the campus of Chicago State University to replace the existing station at 95th Street on the Metra Electric Line. Project is in design but expected to go out to bid soon. Final costs TBD.

Valley Metro provides bus and light-rail service in Maricopa County, Arizona. Progress continues on five high-capacity transit extensions that are either in planning or under construction to create a 50-mile rail system by 2030. In late 2021, Valley Metro will open the region’s first streetcar line in Tempe that features the Valley’s first off-wire operations in the system.

• Northwest Extension Phase II, which will extend light rail west on Dunlap Avenue from 19th Avenue, then north on 25th Avenue and across I-17 on Mountain View Road with a terminus on the west side of the freeway near Metrocenter Mall. At the end-of-line, the Metrocenter Station will be the first elevated station in Valley Metro’s light-rail system. The extension will be 1.6 miles long with 3 stations. Contractor: Kiewit McCarthy JV. Total cost: $401.3 million.

• Lifecycle Overhaul and Upgrade Facility (LOU). Featuring 33,000 square feet of maintenance space, the LOU will allow VRE to maintain rolling stock, systems and components in a state of good repair. The LOU will house two tracks, holding up to four cars at one time, and be equipped with a drop table and wheel truing machine. To maintain storage capacity within the yard, three new tracks will provide enhanced flexibility for train movements and storage. Cost: $52.2 million. Contractors: Clark Construction, Gannett Fleming. Completion: Q1 2023.

• Rolling Road Station improvements: An extended platform will accommodate eight-car trains. Rehabilitation and repair of the existing platform, replacement of stairs and the existing canopy roof, and an upgrade of the lighting and communication systems are planned. Cost: $5 million. Contractors: Sumter Contracting Corp., STV Inc.