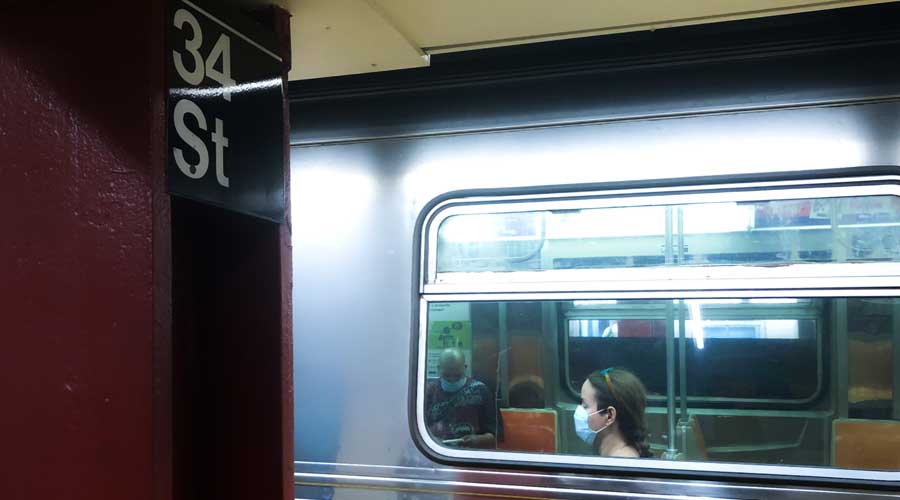 This summer, Progressive Railroading asked North American passenger-rail agencies to describe in the magazine’s annual "Passenger Rail at a Glance" survey how the COVID-19 pandemic has affected their organizations. We wondered, how are they adapting to providing transportation while also protecting employees and passengers? And what challenges do they expect to face during the remainder of 2020 and into 2021?

Survey respondents described the dramatic impact on ridership levels during stay-at-home orders early on in the pandemic, and a slow return to ridership after those orders were lifted. Agencies also are taking a massive hit to revenue due to the loss in fare income. At the same time, they’re facing increasing expenses related to the need to sanitize trains, provide personal protective equipment (PPE) to employees, install hand sanitizer dispensers at stations and on trains, and add rail cars to allow passengers to maintain 6 feet of social distance.

For example, the Greater Cleveland Regional Transit Authority (GCRTA) is facing an "unprecedented" 50% loss in ridership.

Wrote Capital Metropolitan Transportation Authority officials in Austin, Texas: "The challenge will be getting ridership back up for 2021."

Below are summaries of some of the other agencies’ pandemic experiences and plans, according to their survey responses.

Bay Area Rapid Transit (BART)
BART officials estimate the financial hit on revenue due to the pandemic to be nearly $1 billion over three years, agency officials said. BART relies on passenger fares and parking fees to cover about 65% of operating costs. Ridership plunged 94% in April and remains at 88% below normal levels, which results in an ongoing loss of $40 million a month in passenger revenue.

BART's second source of revenue is sales tax, which covers 28% of operating expenses. Statewide, taxable sales dropped 27% from March through June, which resulted in about a $6 million revenue loss to BART.

"We project that the pandemic and resulting economic recession will reduce BART's revenue by approximately $975 million," they wrote. "Funding from the CARES Act bought us time, but will offset just 40% of the loss."

The economic downturn will exacerbate the loss, affecting every other BART revenue source, agency officials said. Meanwhile, as BART struggles with losses in revenue, certain expenses have gone up for items such as additional disinfecting, signage and increased staffing to respond to the pandemic. BART has budgeted about $44 million for such expenses in FY2021.

Metropolitan Atlanta Rapid Transit Authority (MARTA)
MARTA rail ridership as of early September was down by an average of 70% and has been slow to return to pre-COVID levels. The agency has adjusted rail schedules to meet current demand and has fewer trains in service. Standby trains remain ready if social distancing is compromised, agency officials said.

In addition, light-rail ridership has dropped significantly with the cancellation of sporting events, and leisure and business activities. There are no plans to permanently cut service.

To ensure the safety of employees and passengers, MARTA has:
• deployed electrostatic sprayers to clean rail operator cabs, high-touch areas in rail stations during the day and all trains overnight;
• deep-cleaned heavy rail stations, light-rail stops, trackways and all facilities;
• required masks to be worn by all employees, contractors, visitors and riders;
• distributed free masks in rail stations and made hand-sanitizing stations available in all MARTA facilities and at all rail stations.

"Despite a loss of farebox revenue, we have avoided layoffs and furloughs," wrote MARTA officials. "Quarantining procedures have led to staffing shortages and hiring, and in-person training remains difficult. Some projects have been delayed due to contractor staffing shortages, social distancing requirements and vendor work and travel restrictions."

However, projects in MARTA's capital improvement program have been able to continue, thanks to a "decade of fiscal responsibility, strong financial reserves and government aid," agency officials said.

Looking ahead, MARTA has set up a "Return to New Normal Task Force," which is creating protocols for office staff to return to work. The group is overseeing measures designed to ensure a safe working environment. Those measures include installation of air purification systems at all air-conditioned facilities, a temperature-check pilot program, employee mask distribution and office reconfiguration plans.

Additionally, MARTA has created a dashboard on its website that shows current COVID-19 cases in the agency’s workforce and the status of each, along with daily ridership numbers. The information is available for employees and passengers to view.

"We remain focused on protecting the health of our customers and employees, and in the coming months we will work to continue providing an essential service, advance our capital projects, and reassure riders that transit is safe, clean and still the most efficient, affordable way to travel," MARTA officials said.

Metro Transit-St. Louis
In St. Louis, the pandemic has contributed to a significant decline in ridership that began in late March, and also contributed to a decline in available light-rail operators, agency officials said. In response, leadership reduced the frequency of train runs on MetroLink light-rail service, as well as on the agency's bus service. Over the summer, as workforce resources became more available, light-rail service was restored to pre-COVID levels.

"However, lower ridership continues to be a challenge that Metro Transit is expected to have to face for several months as the pandemic persists," Metro Transit-St. Louis officials wrote.

Reinforcing safety measures will be key in restoring customer confidence. At the same time, agency execs expect to face the realities that remote work, virtual education and the absence of sporting and other major events will continue to contribute to ridership declines, they added.

Some safety measures already in place include hand-washing stations at 38 MetroLink light-rail stations and transit centers; mask-wearing requirements on light-rail platforms, trains and all transit vehicles; the introduction of mobile fares to eliminate the physical exchange of fares; and boarding and seating modifications that enable riders to maintain social distancing on light-rail trains.

Regional Transportation District-Denver (RTD)
RTD anticipates a $215 million shortfall in FY2021 due to the pandemic. As of early September, RTD was carrying about 40% of pre-pandemic ridership and providing about 60% of the pre-pandemic level of service. To help address revenue losses, the agency: has implemented a hiring freeze; expects to lay off 25% to 30% of its workforce; and will defer about $114 million in capital and maintenance projects.

In addition, RTD will forgo pay increases for salaried employees in 2021 and will implement tiered furloughs, ranging from zero furlough days for employees at the lowest salary range and up to 18 days for the highest income earners.

Santa Clara Valley Transportation Authority (SCVTA)
At SCVTA — an independent district responsible for light rail, regional commuter and intercity passenger rail in California’s Santa Clara Valley — trains have been carrying "anywhere from from 0% to 25% of our regular riders since March 2019," agency officials said. Light-rail service was shut down entirely for four weeks after two employees tested positive for COVID-19.

"We lost $3 million in revenue each month when we were not collecting fares between mid-March and Aug. 1, 2020," they said. Capacity on light-rail vehicles is restricted due to the mandate to offer 6-feet distance between customers.

The agency has experienced major cost increases as a result of vehicle and sanitation practices and installation of customer signage, hand sanitizer and disposable mask stations.

SCVTA has launched a 10-Point Plan to Strengthen Trust in Transit and joined the Bay Area Healthy Transit Plan.

Southeastern Pennsylvania Transportation Authority (SEPTA)
SEPTA officials are warning that, over the next decade, the authority will have to slash regional rail lines, eliminate dozens of stations, pull back subway service and convert trolley routes into bus routes unless Pennsylvania officials address the state’s budget crisis.

On Aug. 14, SEPTA General Manager Leslie Richards testified before the Pennsylvania House Transportation Committee that the authority recorded $124 million in lost revenue from March through June, as ridership plummeted by 92% on subways, buses, trolleys and regional rail.

"SEPTA is losing about $1 million daily and expects fare revenue to stay low for the next couple of  years," agency officials said.

On Sept. 8, SEPTA unveiled its COVID-19 recovery plan, covering pandemic lessons-learned so far and a framework for moving ahead. The plan features planning scenarios based on projections for the pandemic, the economy and social behaviors. It includes efforts to incorporate best practices from peer agencies, as well as from cities worldwide that are farther along in the recovery process.

The plan also details SEPTA’s commitment to evaluate all aspects of business with a focus on equity and inclusive growth, agency officials said. The recovery will build on existing sustainability programs, improve the customer experience through efforts such as a new rail transit wayfinding master plan, and rethink service through other initiatives, they added.

Sound Transit
The Seattle-based agency has logged a roughly 80% decline in ridership due to the pandemic, which has reduced revenue needed to expand the regional transit system.

Sound Transit officials estimate the pandemic and its related recession will have a cumulative fiscal impact over the next two decades of $8 billion to $12 billion, or 12% to 18% less revenue than previously assumed.

"With greatly depleted revenues, Sound Transit will not be able to deliver many expansion projects on their original timelines unless we receive alternative revenue from federal or state sources," they said.

Using a "realignment" process, Sound Transit’s board is deciding which plans and timelines for voter-approved projects will change due to lower revenue projections.

The board established the realignment process in June and will rely on it through summer 2021, providing time for the recession’s financial impact to become more clear while agency officials pursue additional funding opportunities. In setting expectations for project timelines, the board will seek input from public and partner organizations.

Based on agency contract commitments already in place, Sound Transit will focus future realignment actions on projects that are not now under construction or contract.

South Florida Regional Transportation Authority (SFRTA)
SFRTA, which operates Tri-Rail, reduced service to 40% of the pre-pandemic level and suspended fares in late March after ridership fell by 70%. The agency continues to monitor ridership and increase service incrementally as demand increases. Currently, service is operating at 50% of normal service levels.

Without charging fares for months, revenue is down. Funding from the federal pandemic-relief legislation known as the CARES Act has helped cover the agency’s costs to maintain service, "which has helped the agency survive" during the crisis, SFRTA officials said.

"It remains to be seen how long the pandemic will continue to affect service, but the hope is to continue to bring service back along with reinstating fares soon, to begin the return back to normal," SFRTA officials said. "Small signs of people returning to the trains are starting to manifest."