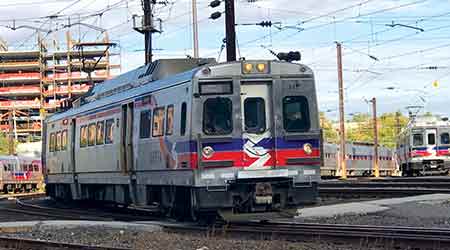 The past few months have been particularly trying for the Southeastern Pennsylvania Transportation Authority (SEPTA). Since July, the Philadelphia transit agency has dealt with everything from a downsized commuter-rail fleet and overcrowding to a worker strike that halted subway, trolley and bus service.

But SEPTA leaders are hoping to alter course and get things moving in a more positive direction in the new year — at least as far as the agency’s commuter-rail operations are concerned. Last month, they released a multipronged Regional Rail improvement program, which includes plans for fleet updates and increased on-time performance.

"We got hit with a tidal wave of problems starting in July, but that doesn’t matter to riders," says Jeffrey Knueppel, SEPTA’s general manager. "They don't want to hear about the problems. They want good service, and that's what we're determined to provide."

In July, the agency pulled all 120 Silverliner V cars from service due to a defect with their suspension systems; those cars account for about a third of SEPTA's fleet.

But the agency's on-time performance began to slip before the Silverliner V incident, Knueppel says.

"The problem of worsening on-time performance isn't as much of a recent phenomenon," he says. "We've been working on this program and how to address these issues for a while — even before the Silverliner V problem."

As far back as 2014, severe weather began increasing delays for SEPTA's commuter-rail system. On-time performance continued to suffer into 2015.

The improvement plan targets nine areas total, such as communications, safety and infrastructure. To boost on-time performance and capacity, the agency has ordered 15 locomotives from Siemens and plans to purchase 45 multi-level cars, although the agency hadn’t settled on a provider for those as of mid-December.

Part of the service improvement program also involves bolstering the agency’s working relationship with Amtrak. Forty-seven percent of SEPTA’s Regional Rail trains are directly controlled by Amtrak dispatchers at some point on their journey.

So, SEPTA managers have pledged to hold biweekly meetings with officials from the national passenger railroad to discuss current issues and evaluate long-term options for better coordination of each entity’s services.

"They're going through the same kind of issues that we're having," Knueppel says of Amtrak. "We're working to improve coordination levels."

Communication with riders is another key element of the improvement plan. To that end, SEPTA plans to provide real-time information for all Regional Rail cars on its website and mobile apps. The agency also placed social media staff in its control center to facilitate information delivery.

In addition, SEPTA created a "microsite" to keep riders up to date on the improvement plan.

Still, agency officials acknowledge that they've got a long way to go to restore riders' confidence in the system's performance.